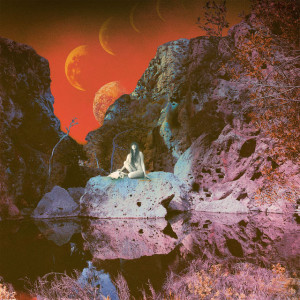 From the primordial beginnings of the band, Earth’s music has always moved at a glacial pace. Their songs, such as they are, possess an unusual ability to make time appear to be standing still. Earth however has been slowly evolving at about the same pace of most of Dylan Carlson’s hypnotic riffs.

To date, there has been two fairly distinct periods in Earth’s growth as a band: The monolithic metal beginnings (Earth 2 and Pentastar, for example), and the country drone era (Hex and The Bees Made Honey In The Lion’s Skull, for example). Primitive And Deadly marks a further evolution of Earth, and finds the band fusing its prior incarnations to move forward once again.

Those that feared the metal elements of Earth’s sound had disappeared into the firmament will be appeased by opening track Torn By The Fox Of The Desert Moon, a song dominated by ferociously heavy riffing and guitar tones. It is quite possibly the heaviest thing that they’ve recorded since 1996 and Pentastar. Adrienne Davies’ drums keep insistent time, and as usual they are quite understated, but there are moments where she’s possessed by those huge riffs and creates an epic thunder as the band recreates a slow motion version of late ’80s thrash.

There Is A Serpent Coming is the first of a couple of songs that features guest vocalist Mark Lanegan, a man who seems to be the go-to guy when it comes to guest vocalists these days. There’s a reason he’s in such high demand of course, there is simply nobody else that possesses those quite incredible earthy vocal tones. It is quite unusual for Earth to feature a vocalist but Lanegan suits them perfectly. However, it nearly falters here as Lanegan’s vocals sit within the undulating waves of the song, just about holding their own in a swirl of serrated distortion, howls of feedback and cavernous reverb.It’s not a damp squib exactly, but for a moment, he feels lost in the flood of sound.

Sat in the middle of the album is From The Zodiacal Light its standout moment. An evolution of the ideas laid out on Omens And Portents I: The Driver (from The Bees Made Honey), Earth ratchet up the tension. Carlson’s guitars are at times demure and delicate, but there’s also a sense of raw danger too as they are occasionally pushed to the brink of uncontrollable feedback; the rhythm section of Davies and bassist Bill Herzog meanwhile keep things under control in determined fashion. At the centre of the song is vocalist Rabia Shabeen Qazi (Rose Windows) who, unlike Lanegan, appears to hover above the cacophony and guide it, bending it to her whims like some kind of prescient angel. At times her phrasing and powerful presence sound not unlike PJ Harvey (indeed there are moments that bear resemblance to Harvey’s song Hook), but make no mistake this is a powerful performance in its own right.

Even Hell Has Its Heroes is a meandering (in the best possible sense) blues jam that sounds like Hendrix in fine improvisational form. It’s the freest guitar playing Carlson indulges in on the album with the majority of these songs rigidly structured and at times bordering on conventional rock song territory. The addition of a doom-laden bell chime and an ominous chanting choir give a bleak atmosphere, but Carlson’s guitar licks are more heavenly than hellbound.

The dusty, haunted high-plains country swirls of Rooks Across The Gates closes the album in a fashion familiar to the most recent Earth albums. This is Earth at their most expansive and thrilling, the guitar exposition is quite wonderful, creating Western landscapes in the mind’s eye. Lanegan returns, giving a more convincing performance, thanks in part to the space that is afforded to him this time around. This time around, the mix is utterly enchanting, precisely what you’d expect from the coming together of two of Seattle’s finest talents.

Primitive And Deadly, in part, represents an encapsulation of Earth’s discography, but more importantly it also sees the band moving on, entering a new phase and expanding their dimensions.