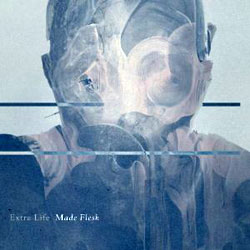 On the LoAF Recordings website, Made Flesh is described as “both more accessible and more severe” in the context of Extra Life’s previous work. How accessible it proves to be depends entirely on the listener of course, and they have a tough task with some of the highly charged music and occasionally squeamish lyrics on offer here.

That’s not to say it should be written off without further investigation, mind. The Ladder is an extraordinary piece of work, clearly influenced by medieval vocal writing, with sudden frenetic bursts of energy from the band. It doesn’t exactly warm the cockles though, with its uncomfortable description of the “corrupt child, naked at her computer”. “I washed her hair,” sings Charlie Looker, “showed her right from wrong.”

Moving swiftly on, One Of Your Whores begins with an operatic aside before Looker brings a more comforting vocal to a strange plink plonk accompaniment. The peace doesn’t last, however, and the underlying tension breaks with cut and thrust comments from the band.

Here, as throughout the album, Looker’s voice is an extraordinary instrument, with the ability to move from a subterranean monotone up to a higher expressive yelp. In between some rapid note changes it recalls in particular Guillaume de Machaut. One wonders what he would make of the style added to a full on rush of guitar distortion. One thing’s for sure, it wouldn’t elicit an ambivalent reaction, especially in the case of final suite The Body Is True.

Extra Life cannot be condemned for a lack of ambition, but too often this record’s influences stack up as an ultimately confusing and volatile style of music to listen to, rather than anything that makes immediate sense. Repeat listens make it easier to prepare for the full band outbursts and strange musical about turns, but also increase the frustration at the restless nature of each song. Only Black Hoodie bucks this trend, and its more tender asides prove the most moving emotionally too.

As you’ll have already gathered, despite its new found ‘accessibility’, this is not a record for the faint hearted. Fans of The Mars Volta, Battles and even Rush might find musical strands to detain them, but even they might end up scratching their heads long before the end, for Extra Life are perhaps just too experimental, even for those with long attention spans.