by Helen Clarke
published: 23 May 2013 in Album Reviews
Tweet 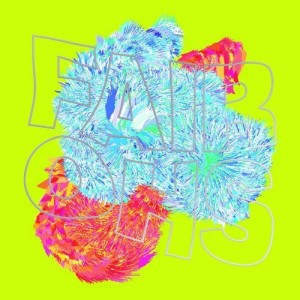 When their first album Everything Is Dancing was released back in 2010, Fair Ohs were labelled in some quarters as a punk Vampire Weekend; the Afro-pop elements of their sound singled out for the slightly strained comparison. Three years on, and the London trio haven’t tried to distance themselves from this. Quite the opposite; they’ve embraced the strands that commentators lazily plucked out and developed a bigger sound, a sort of ‘world music’ that doesn’t require tie dyed clothing and trips to Womad.

If that sounds pretentious, rest assured Jungle Cats is not. With an ever-present, raucous punk aesthetic, it dips into sounds from across the globe, coaxing out Cuban rhythms, African guitars, San Francisco psych, chaotic Turkish pop, Indian ragas and layers of funk, mixed in with the chorus-heavy sing-alongs that made the recent Theme Park debut a delight. The remarkable thing is how immediate some of these, really quite complex, tracks are. Born to be played in the basement venues of Dalston, the album’s production has a rough, sweaty feel to it that almost sounds like it’s being sung along to already. Think The Rapture covering Foals; experimentation is all well and good, but they never let it get in the way of a good tune, and it’s delivered at breakneck speed.

The album’s first single, Ya Mustafa, is its perfect ambassador; slightly more controlled than the bulk of the record, it’s based on an Arabic/French hit of the same name from the ’50s, which singer Eddy’s grandmother was apparently a fan of. Other inspirations namechecked include West African harp music and The Eagles. Elsewhere Citric Placid recalls the driving beat behind Foals’ Cassius, given a Dingus Khan overhaul. Other highlights include the fiesta-like Cayman Brac; surreal, lofi desert rock of Green Apple Milk and marching thud of Sleep.

Jungle Cats winds up with the end-of-the-night tracks Salt Flats and Mountain Bombs; both are sparser than their predecessors, echoing with a sort of campfire warmth, but they lack the creative instrumentation of the rest of the album. ‘Slowies’ aren’t yet Fair Ohs’ forte, which is a shame because it would afford them the luxury of being able to show off the sounds and ideas they’ve so studiously collected in a more calm and collected way.

Their second outing sees Fair Ohs if not mature, then certainly get to grips with a thousand different sounds that they’ve somehow managed to make their own. With album number three, they’d do well to think about how this translates into some more exposed, anthemic tracks, the lack of which constitutes the only hole in Jungle Cats.