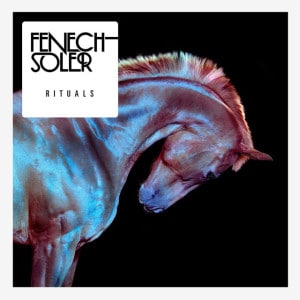 It feels like Northampton electro-pop outfit Fenech-Soler have been around for years – and they have, originally forming in 2006. But only now are the quartet getting around to releasing the follow-up to their self-titled debut, which arrived to much fanfare in 2010. The delay was mainly due to the band’s lead singer Ben Duffy being diagnosed with early-stage testicular cancer in 2011, which led to the postponement of their UK tour.

After being successfully treated, Duffy and co were quickly back to doing what they do best, playing live sets across the country – including energetic performances at Glastonbury and V Festival – before returning to the studio. Yet while leaving a gap of three years between their debut and album number two is a risk in today’s fast-moving music industry, Fenech-Soler could not have timed their return any better.

With dance acts like Disclosure dominating the airways, Fenech-Soler’s own brand of indie-inflected electro-pop seems to be in demand once again. And while their eponymous debut was hardly groundbreaking, it was packed with some unquestionably catchy hits. As a result, the pressure is on the band to emulate that success with their second record, Rituals.

The signs were promising following the release of the first single, Magnetic, which features sultry, sprawling synths and a chorus that sounds not-too-dissimilar those heard on previous Friendly Fires records. As with much of the band’s debut, the song is an enjoyable, glossy romp without ever sounding particularly unique – a formula replicated throughout the album with varying degrees of success.

When Fenech-Soler do get it right, though, it is hard not to be drawn in by their intoxicating haze of searching synths and straightforward, catchy choruses. Take second single, Last Forever, which is almost five minutes of blissful pop, with Duffy’s melodic vocals resting over swarming synths and a constant beat, as he sings: “Now that we’re here/ feel so alive/ we can make this last forever/ we can waste time together.”

Opener Youth is soaked in warm reverb, with sun-drenched synths and a funky undercurrent, while In Our Blood is one of the best moments on the album, demonstrating just how effective the band can be when they are more direct. The latter’s punchy beat gives it a strong backbone for the synths to work off, before evolving into another euphoric chorus that does appear to be borrowed from Friendly Fires.

Elsewhere, All I Know and Maiyu verge on the territory of club bangers, with monstrous beats, polished synths and soaring choruses that beg to be played at full volume. But arguably the highlight of the album is slow-burner Two Cities, which feels almost eerie to begin with, before the expansive, sprawling synths roll in and Duffy’s soothing vocal takes off, as he sings: “I’ve been trying to make you see/ see the good in me.”

However, while there are plenty of big tunes on offer to satisfy fans, Rituals does become rather repetitive around the midway point. Tracks such as Somebody and Fading are completely forgettable, with both lacking the infectious quality of the album’s singles. Furthermore, despite Rituals being a largely consistent return, there is a nagging sense throughout the record that the band are retracing old ground.

Of course, Fenech-Soler would not be the first band to try to mimic their first album, but considering their self-titled debut was difficult to distinguish from their peers anyway, Rituals would have benefited from some more ambition. As good as it is to have Fenech-Soler back, Rituals plays it far too safe for a band that clearly has the potential to progress to bigger and better things.