by Michael Cragg
published: 3 May 2010 in Album Reviews
Tweet 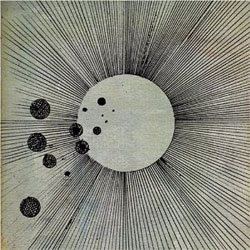 When a Radio 1 DJ pronounces you as the “Jimi Hendrix of (your) generation” it’s likely easy to feel big-headed. But if there’s an ounce of arrogance about Flying Lotus, aka Steven Ellison, then he’s not showing it. Cosmogramma, the follow-up to the much-lauded Los Angeles, is a densely woven, sometimes darkly paranoid collection of electronic music that mainly avoids typical genre descriptions.

Opener Clock Catcher manages to pack more ideas into its two minute length (most of the 17 tracks are below the three minute mark) than most acts fit into entire albums. Beneath a gurgling beat and distant vinyl scratches a plucked harp suddenly arrives, creating a moment of beauty that is then countered by the harsher sound of scratches on metal guitar strings. This constant juxtaposition between the soft and the harsh defines the album, creating tension throughout.

Zodiac Shit slows the pace to a drip feed, building up layers of clipped breaths and soft handclaps before an orchestral flourish interrupts like a sudden break in the clouds. Elsewhere, FlyLo also indulges his jazz ancestry (he’s the nephew of Alice Coltrane) on the horn-inflected Arkestry, while on Table Tennis he literally loops the sound of a table tennis ball bouncing about; it sounds tacky but works brilliantly.

The main focus of the album, at least in terms of pre-release buzz, is the Thom Yorke collaboration, …And The World Laughs With You. Built around a typically vague and repeated phrase from the Radiohead lynchpin, it’s not quite the sum of its parts and is perhaps weighed down by the starry connection. It’s trumped by the excellent Computer Face//Pure Being, which marries massive synth noises, clattering beats, strange sci-fi noises and a frantic finale. It’s to Ellison’s infinite credit that all the layers of sound are used with brilliant panache, and though the songs are densely packed they never get lost beneath the noise.

Perhaps Cosmogramma’s main strength lies in catering for many rather than the elusive few, as can sometimes happen with electronic music. Jazz rubs up alongside dark electro, which in turn is brightened by beautiful bursts of strings and harp flourishes. Proclamations of his greatness may be slightly exaggerated, but Cosmogramma certainly adds to a deservedly growing reputation.