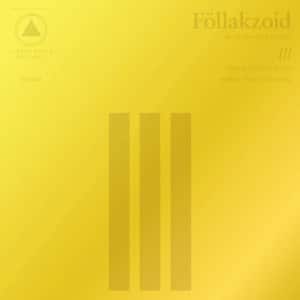 Krautrock has become a fashionable term to bandy around in order to describe a certain type of rhythm in music, a certain sense and use of space, a certain predilection for taking things in a cosmic-minded direction. It’s an overused bit of shorthand, but you can’t describe what Föllakzoid sound like without employing the word. The influence of Neu! on their fiercely motorik underpinnings, and the precise pin-point detailing of Kraftwerk, are both very much in evidence.

Overuse is not the only problem with the word krautrock. As well as demanding a negotiation of the pejorative ‘kraut’, it ties the music doggedly to Germany. Admittedly, the initiators of the genre were indeed German, but their influence has been so deep and widespread that it has gone beyond being a German music. Föllakzoid, for instance, are Chilean – although from that conspicuous umlaut it’s clear that they are very much aware of their antecedents. The name, though, is almost a translinguistic pun: pronounce the double L sound as a Spanish-speaker would, and it sounds like Feuerzeug, the German word for lighter (that’s as in cigarette lighter, rather than as in the state of consciousness that their music sometimes sounds like it’s trying to conjure up).

Feuerzeug is also the name of the last of the four tracks that comprise III, Föllakzoid’s third album, and its near-eponymous title suggests that this should be seen as a culmination of what the band are aiming at. Certainly, it’s a culmination, and a distillation, of what III is aiming at, with motorik bass and drumming, repeated guitar motifs, occasional interventions of synth that are more about texture than pitch, and infrequent snatches of vocals. The first three tracks clock in around the 12-minute mark, with Feuerzeug being slightly shorter at nine minutes long, so there’s a sense of symmetry on top of that continuity.

It wasn’t always exactly thus. Föllkzoid have always operated at the more psychedelic, prog rock end of the musical spectrum, but their self-titled debut album was heavier, and took slightly more from the blues-rock tradition from which the original wave of krautrock deviated. Their second LP, II, with galactic cover art and expansive, repetitious jams, took more of a space rock direction. III takes things further still, yet it reins the mood in more tightly.

The guitar is now less prominent; the shape of the sound is dictated by prominent basslines and those motorik drum patterns. The music is minimal – minimal in the same way that minimal techno is minimal, with subtle adjustments to pitch and tone. At times there is more detail going on within the mix than might be apparent on the surface: there are scratched frets and whispering static sounds that could be digital, analogue or organic. Occasionally, the guitar is freed from the constraints seemingly imposed upon it by the ruthless rhythms, and it unwinds; this is the case in Piure, which tends towards post-rock almost as much as it does toward krautrock.

On the occasions when the vocals emerge, usually half-submerged in the mix and always indistinct, there is something in the production – in the way that the ingredients of the music are juxtaposed and combined – that recalls Martin Hannett’s famous Joy Division productions. In its use of spaces and spaciousness the album has something post-punk about it; and that’s a reminder that, in a way, krautrock started being post-punk before punk had even happened. Föllakzoid carry forward both traditions in their own uncompromising way, and with III they deliver their most polished album to date, and their most coherent statement of how they relate to their forebears.