The Fratellis – We Need Medicine 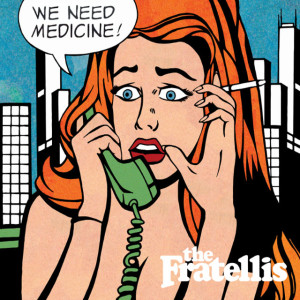 It was 2006 when The Fratellis released their first album, Costello Music, and although it was an immediate success, the band’s place on the roadmap of mid-2000s indie was the subject of debate. They arrived a few years after guitar music had enjoyed a rejuvenation at the riffing and fretting hands of the likes of Franz Ferdinand and The Libertines, and although the pejorative term ‘landfill indie’ might not yet have been coined and groups like Scouting For Girls and The Wombats hadn’t yet found their way into the charts, the ennui associated with those names had almost started to set in.

The Fratellis might have had their detractors, but for the most part they avoided being lumped in with the landfill. They had a ragtag appeal, and with big, fast, catchy songs like Creeping Up The Backstairs and the anthemic Chelsea Dagger they secured a place in the sub-canon of the genre and the time. But subsequently their fortunes changed: their 2008 album Here We Stand sold well but was poorly received, and the following year they went on hiatus.

Comeback record We Need Medicine picks up near enough where Here We Stand left off, maintaining that blues rock sound rather than revisiting the punkier pogoing sound of Costello Music. It’s the least ramshackle-sounding album The Fratellis have released to date – but that ramshackle thing was part of their charm. Opening track Halloween Blues has a coolness to it that suggests they might be trying to adopt a similar evolutionary path to that followed by the Arctic Monkeys. Might they have their sights set on a Glastonbury headlining slot?

Speaking of Glastonbury headliners, there’s more than a hint of the Rolling Stones about much of We Need Medicine – indeed, the slow, heavy blues rock of Shotgun Shoes sounds almost like a pastiche. The Fratellis certainly sound like a more mature band now: the problem is that rather than sounding like a group who have grown to maturity, they sound like the kind of mature band that have reformed to plod their way around the stadium and festival circuit once they’ve reached the wrong side of middle age.

Whisky Saga is more youthful, but it virtually recycles bits of Costello Music: is that a riff from Creeping Up The Backstairs and a melody line from Vince The Loveable Stoner that we hear? At least recycling is better than landfill. Better still is Jeannie Nitro, which sounds like a progression rather than a leap towards premature greyness. This track also follows their old practice of creating a memorable character who might have stepped out of an urban fairytale; elsewhere in the album the lyrics are pretty characterless.

The title track is perhaps the song that’s best representative of We Need Medicine. It aims directly at the mood of big fat hoedown-shaped beer-waving singalong, and it hits its target. Lots of horns kick in towards the end, and there’s even a bit of boogie-woogie piano playing. Technically it’s hard to fault, and The Fratellis sound tighter than ever, but it’s somewhat soulless.

It seems that with a bit of saxophone here, a massive chorus there, lots of blues licks on the piano, and some well-handled guitar The Fratellis hope to ascend towards Bruce Springsteen style stadium rock. The ingredients might be mixed correctly, but the cake hasn’t quite risen. Maybe the album’s title sums it up: if this is a band that needs medicine then what they ought to be prescribed is medicine for the soul.

The Fratellis MP3s or CDs

The Fratellis on Spotify