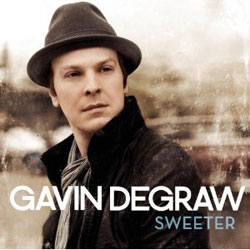 American singer-songwriter Gavin DeGraw is most widely known in the UK for his signature single, I Don’t Want To Be, which was used as the theme song for popular American teen-angst show, One Tree Hill. It may not be something that many artists would want to be known for, but it did give DeGraw’s 2003 debut album, Chariot, much needed exposure. There is certainly clamour for DeGraw Stateside, with Chariot later certified Platinum in the US, leading to TV appearances on the heavyweights, such as The Tonight Show with Jay Leno and The Late Show with David Letterman.

His self-titled follow up also did well in the States, outperforming Chariot on Billboard’s Top 200 chart, whilst his third album, Free, was also relatively well-received. DeGraw’s bluesy vocals and soft rock stylings are by no means groundbreaking, but his music undoubtedly makes easy listening. In the build-up to his fourth album, Sweeter, DeGraw suggested a new direction, “I was able to record all the styles of music that I like and put them on one album. It was great to take my leash off and experiment.” If DeGraw really did take the leash off during the recording of Sweeter, then he only loosened it, rather than actually take it off completely. Much of Sweeter is too pedestrian, with DeGraw’s fourth album failing to be markedly different from the rest of his back catalogue.

The album starts promisingly, opening with the pop-funk title track, Sweeter. The chugging guitar and piano combination provides the track with real drive, and when you add DeGraw’s strong and soulful vocals on top, it all makes for a purposeful opening. The album’s lead-single, Not Over You, which was co-written with Ryan Tedder (One Republic’s lead singer), features a jangly piano and artificial drum beat. Its slick production and niggly technical effects clearly align the song with Teddar’s previous work, yet DeGraw’s excessively worded chorus comes across as awkward and emotionally faux.

Run Every Time is a more standard affair. The verse does little of note, before DeGraw’s vocals burst into life in the chorus, as he sings once more about his troubles in love, “Ooh, she’s ready, I’m not ready / I hear people go crazy for steady / But me, I run every time”. You Know Where I’m At sees the New York native strip down his sound to just a sparse drum beat, piano and his crooning vocals, with the end result being a slow, simmering ballad. It is followed by Stealing, which is hard to distinguish from the previous track in sound and texture. It’s all very nice, but ultimately toothless.

DeGraw does make further attempts at breaking away from his constrained, melodic pop rock other than the album’s title track. Soldier is a soulful, rousing number that really shows off the dexterity of DeGraw’s vocals, simply relying on a clapping beat and the ever present piano. It is by no means a drastic departure, but it is evidence of DeGraw approaching his sound with more thought than ever before.

Radiation leans heavily on a funky guitar after starting with a rowdy sing-a-long, before DeGraw hits his stride in the chorus, which is edgier and more adventurous than anything else on Sweeter. Yet, it swims alone in a sea full of mid-tempo rock ballads, with DeGraw often satisfied to remain in his comfort zone. This is not necessarily a bad thing, Sweeter is often an enjoyable listen, one that will appease his One Tree Hill fanbase. However, with four albums now to his name, DeGraw should be looking to broaden his musical style and take some more risks. Barring a couple of exceptions, Sweeter is on the whole a timid affair, one that is all too forgettable.