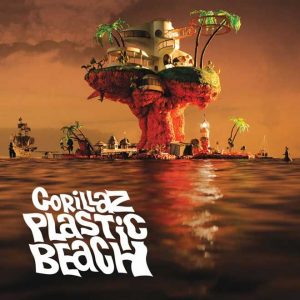 Gorillaz are, as everyone knows by now, not really a cartoon band. They’re much more than that. Used by Damon Albarn as a way of infiltrating the pop mainstream without actually being the front man to anything tangible, the concept has now morphed into the brand name for a collective of musicians who are, for all intents and purposes, Gorillaz.

By creating a public avatar of cartoon characters that remain constant, Albarn is allowed to shift the musical players about. It’s to his credit that, despite all the guests, there is a genuine sense of cohesion to Plastic Beach. It helps that there’s a loose concept tying the strands together – Murdoc, the cartoon front man, has been marooned on an island made of discarded rubbish – and themes such as the destruction of the planet, pollution and our general wastefulness reoccur throughout.

This anger at the state of things reveals itself most tellingly on Plastic Beach’s softer moments. Tracks like Broken, Rhinestone Eyes and Melancholy Hill are suffused with genuine melancholy, Albarn sighing the lyrics in that little boy lost way he’s perfected. These three tracks also represent the album at its most straightforward, but there are still moments of experimentation loitering at the periphery; the way the keyboards on Rhinestone Eyes seem to sigh dramatically, or the odd electronic squiggles that underpin the lovely Melancholy Hill. The best of the bunch, however, is Empire Ants, which starts with a softly skittering drum beat and Albarn’s cracked croon before morphing into an electronic sound storm as Little Dragon join in on vocal duties. It’s spine tingling stuff.

But it’s not all ponderous and downcast. In fact, the two moments of pure joy come from the unlikeliest sources. Mark E Smith slurs his way through the future-glam stomp of Glitter Freeze (opening lyric, “where’s north from here?”) and is then followed by the equally curmudgeonly Lou Reed riding a jaunty piano motif on the sprightly Some Kind of Nature. Elsewhere, White Flag mixes Arabic percussion, swooping strings and pulsating beats to spellbinding effect and Gruff Rhys and De La Soul are clearly enjoying themselves on the deceptively cynical Superfast Jellyfish.

Whilst Demon Days was packed full of singles and the self-titled debut album had Clint Eastwood to help it on its way, Plastic Beach lacks that immediate killer track. Stylo, the first single, is a Giorgio Moroder-esque electro monster, but it’s a song in search of a chorus and, despite a deliriously unhinged Bobby Womack’s best efforts – he reportedly fainted during recording sessions and had to be revived with a banana, appropriately enough – it’s not quite the pop juggernaut that DARE is.

But this is a very minor quibble with an album whose only real fault is that it’s ridiculously ambitious. Its real strength lies in the fact that it implores you to return for repeated visits to a world riddled with other people’s cast-offs. Ironically, it recycles nothing; everything here is box fresh.