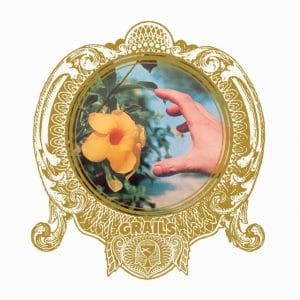 It’s been a while since Grails’ last album, but the members of the band have hardly been sitting still over the last five years. Alex Hall and Emil Amos’ project Lilacs & Champagne has kept the duo busy as they’ve been exploring the furthest reaches of prog/psyche and library music whilst blurring genre boundaries admirably with a liberal application of hip-hop influence.

The sway of Lilacs & Champagne can most certainly be felt on Chalice Hymnal. It’s not that there aren’t passages of the brooding and heavy exposition that informed the band’s previous work (check out the growling thrum of New Prague for example), but this incarnation of Grails, rounded out by Zak Riles of Watter is a far more immersive and contemplative version.

Right from the off it is clear that this is going to be an expansive affair. Previous albums such as Doomsdayer’s Affair might have been cacophonous and impressive in terms of sheer scale, but there was at times an inescapable claustrophobic quality. Chalice Hymnal feels as if the band are relinquishing control and opening themselves to the world, and to a wealth of possibility. The title track is a case in point. A languid prog-sigh, it calls to mind the work of Phillip Glass on the Qatsi trilogy and conjures up images of breathtaking landscapes that stretch as far as the mind’s eye can see. It possesses a sense of weight whilst feeling entirely unburdened too; the result is a soaring and cinematic opening that positively soars.

Pelham is a little more buttoned down, in thrall to krautrock and psychedelic influence, it almost certainly calls on the expertise of Riles. If Chalice Hymnal is a bird flying over a rocky valley, Pelham is the locomotive charging through the landscape below (possibly in the process of being held up by Robert Shaw). Not wanting to up the ante too far, Empty Chamber quickly calms things down with its Loungecore meets spiritual incantation.

After the somewhat disturbing after-hours scene setter of Deeper Politics (think David Lynch and Blue Velvet), Tough Guy finds Grails embracing the darkness and infusing their sound with an edgy hip-hop gait that adds a further menace to proceedings. Before things get too far out of hand the band returns to calmer territory with Rebecca which in less cautious hands could have drifted into the territory of a new-age relaxation track, but instead mixes up Middle-Eastern influences with early synth explorations to create something truly magnificent.

From a dreamy hint of sonic tangerine, things take a turn for royal crimson, and Thorns II takes the band into folk and prog territory. It’s drenched in reverb and has a sense of wide open space, yet miraculously it manages to open out further as it slowly morphs into the closing track After The Funeral. A 10 minute journey of wonder, complete with perfect orchestration straight from the school of John Barry, this is about as perfect as Grails has ever been. A melting pot of ideas, moods, and genres (there’s even a hint of big band jazz in there) it’s a wonderful close to an album that funnels every ounce of its creator’s musical being into something frequently spectacular.

Grails have been many things over the last 15 years, but with Chalice Hymnal, they seem to have found an identity that fits them perfectly. Where they go from here, is anyone’s guess. After an album of such cinematic possibilities, it’s hard to tell whether it’s “THE END” that scrolls into view as the last note rings out, or “TO BE CONTINUED”. Time will tell.