by Christopher Monk
published: 25 May 2009 in Album Reviews
Tweet 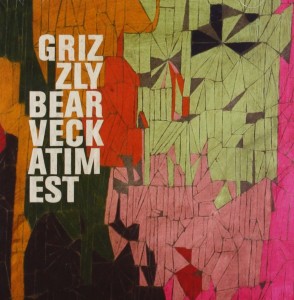 In 2006 the then-little-known Brooklyn-based band Grizzly Bear released Yellow House. A singular mix of folk, chamber music and psychedelia, it appeared on many of that year’s best of lists and has subsequently grown in stature with each passing month.

Since Yellow House, Grizzly Bear have released the reputation-consolidating EP Friend, and followed that up last year by boldly premiering a new song live on The David Letterman Show (the lovely Two Weeks). All this means there’s a groundswell of anticipation ahead of the release of Veckatimest. Admittedly, we’re not talking about the same level of excitement that preceded the release of Michael Jackson‘s Bad in 1987, but it’s safe to say that lots of people have very high hopes for this record.

Veckatimest (named after an island off the coast of Cape Cod) matches these sizeable expectations. Let’s start with Two Weeks. When a band finally gets round to recording a long-cherished live favourite the results can often disappoint, so it’s pleasing to report that the band totally nails the version on Veckatimest version. A doo wop-inspired pop song of immense charm, Two Weeks now has the added bonus of a ghostly vocal line from Beach House‘s inimitable Victoria Legrand.

Veckatimest isn’t an easy album to get your head round: on first listen, there’s an awful lot to take in. Two Weeks is one of a handful tracks that might serve as an accessible entry point, alongside Cheerleader and While You Wait For The Others (the latter’s strident ‘woah-oh’-ing would mark it down as an obvious second single, should such matters carry any importance these days).

But the album’s most impressive moments are those which are initially the most impenetrable. Tracks such as All We Ask, Fine For Now and I Live With You are like huge, architecturally-impressive new buildings – easy to admire from a distance, but difficult to get into. Fine For Now is packed full of bewildering melodic blind turnings, yet somehow negotiates a way out of its claustrophobic verses into a closing passage of serene beauty – it’s worthy of Radiohead at their best, and there are few compliments higher than that.

Like a lot of really good bands, Grizzly Bear are blessed with two songwriters whose styles are distinct yet complementary. Daniel Rossen has a soft, quivery voice, and writes songs brimming with the kind of wide-eyed beauty that tends to attract the adjective ‘Disney-esque’ (see also: Fleet Foxes, St Vincent). Ed Droste sings in a rich baritone and pens songs descended from a classic lineage: the multi-layered chorus of Cheerleader is redolent of the delightfully gooey AOR ballads of the ’70s (think Bluebird by Paul McCartney & Wings. Yes, really).

Production-wise, there’s a greater degree of clarity on Veckatimest than there was on Yellow House. Grizzly Bear have used their (presumably) bigger budget wisely. Woodwind, brass and a choir feature, but these touches of opulence are applied sparingly and tastefully.

Without wishing to sound like a pro-music industry press release, this is the type of record that really is best appreciated on CD or vinyl. For example, the production on the cacophonic I Live With You really is ingenious. It’s made to sound as if it were being performed in a concert hall and, during the quieter moments, you can hear members of the overdubbed ‘audience’ chattering, chuckling and then shushing each other. It’s the kind of sonic detail you’d struggle to notice on an ultra-compressed MP3.

Of course, all this talk of complexity and ‘sonic details’ makes Veckatimest sound like the kind of record it’s easier to admire than to truly love. But it’s fairer to say that Veckatimest simply elicits a different – but no less valid – kind of response than the kind prompted by, say, a Ramones record.

Ambitious yet restrained, elegant yet exciting, Veckatimest is an endlessly-rewarding album which seems destined to vie with Animal Collective‘s Merriweather Post Pavilion for the title of the year’s best.