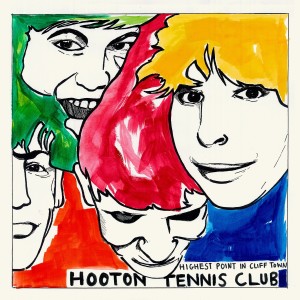 If you’ve not yet heard of these four lads from The Wirral (technically Chester and Ellesmere Port) that were ‘scouted’ by The Farm’s Carl Hunter, then you’re first and foremost going to be asking the question, “What kind of moronic band name is Hooton Tennis Club and where the hell did that come from?”. Well, they were scratching around for a name by all accounts before settling on a road sign, so coming from the Liverpool area maybe we should be thankful they didn’t choose something even more corny instead – like Penny Lane, for instance.

Thankfully, they’re certainly not morons, at least not when it comes to making music. Song inspirations, titles and lyrics would suggest otherwise, however, with just about anything and everything at risk of finding itself turned into a potential number, like And Then Camilla Drew Fourteen Dots On Her Knee being the most glaringly obvious example. Apparently Camilla then drew a line to join them all up, dot-to-dot fashion; if you ever bump into them, therefore, make sure you don’t casually pick your nose or scratch your arse…

Anyway, back to the music which has been partly influenced by bands such as Supergrass and The Jesus And Mary Chain, and desperately trying to avoid an abundance of tennis cliches, it’s a pretty darn fine volley (whoops) of backhanded (sorry) smashes (sigh) being served (argh!) up here. Whilst the band themselves describe their sound as “semi-slack, fuzzy pop”, lo-fi slacker rock with a Britpop feel is probably a more accurate description of Highest Point In Cliff Town, the debut album.

Take the aforementioned pen-doodling inspired cut for example: a slow, lazy trudge of hazy guitar sludge, it’s a compelling listen of raw brilliance that gives a firm nod to bands like Parquet Courts. Jasper was the ‘debut proper’ single – recorded at the home of producer Bill Ryder-Jones’ (or Wild Bill, as the band call him) mother’s house, where chinchillas and geckos provided an unusual backdrop: featuring some impressive, easily recalled guitar riffage, it’s a top effort.

Album opener Up In The Air is a pace-switching cut where vocal tones support the slacker rock reference accurately, whilst the brilliant I’m Not Going Roses Again starts off uncannily like The Dandy Warhols’ sound circa-Come Down, before turning into something a little more reminiscent of their best mates (yes, mates, not adversaries, Dig! is a gross misrepresentation of fact) The Brian Jonestown Massacre, with Anton Newcombe stepping aside on vocals and handing the microphone over to a guest like Andrew Savage, perhaps.

The first record actually released by the band was another crazily named effort – Kathleen Sat On The Arm Of Her Favourite Chair, and it’s an upbeat slice of indie-pop that’s perfect for the summer evenings (grab ‘em quick before they’re gone), a little reminiscent of pre-swagger Oasis given an injection of pure fun. Third single P.O.W.E.R.F.U.L. P.I.E.R.R.E. then conjures up another fun moment, a number reminiscent of the Mancunians’ most famous rivals, Blur.

And that’s what Highest Point In Cliff Town is all about, really – fun, and the fun is simply infectious. The meaningless ramblings of the lyrics such as “we could go for a walk in the park or maybe go swimming” are refreshingly basic and, well, British. The excellent Fall In Luv that closes the album is a pacy cut where fuzzy, distorted guitars scream for attention amidst another decent guitar melody: again, it’s enthralling and it’s difficult to find much at all wrong with Hooton Tennis Club’s first long player. In fact, it’s ace.