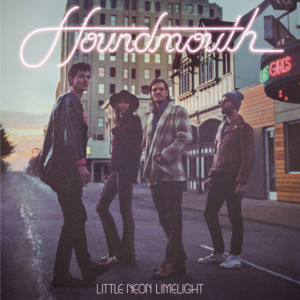 “Too much houndmouth on that track.” A throwaway statement made by drummer Shane Cody when over-zealous neighbouring canines were barking their way on to their recordings has to be one of the most unique origins of a band name, but that’s exactly how New Albany’s folk-rock four-piece Houndmouth arrived at theirs.

The last time we heard from the Indiana quartet, they were still searching for a breakthrough single; it hadn’t arrived as part of their assured – if derivative – “rootsy Americana” debut From The Hills Below The City in 2013, but the first single from the Nashville recorded follow-up Little Neon Limelight could well change that.

Perhaps tellingly, though, they play their joker a little too soon with the excellent Sedona also opening the new collection. Emerging from simple, minimalist beginnings, the track has that rare power to uplift once it erupts in bouncy, happy-go-lucky style; it’s infectious, if once again recalling Bob Dylan’s old cohorts The Band, as does the plodding, smoke-filled bar focus offered by Otis. Ultimately, the debut – as impressive as it was – wore its influences on its sleeve and the second effort does little to tackle this issue.

Dylan himself is recalled on a couple of numbers: firstly, the acoustic For No One ventures forth with little accompaniment for Matt Myers’ warble, the chorus particularly sounding very Dylan-esque. Say It Like You Mean It then delves into Dylan’s electric guise before the live favourite explodes in an increasingly ramshackle, chaotic chorus where everything but the kitchen sink ends up being thrown into the mix.

The Rolling Stones’ early 1970s spell is another obvious reference point. Black Gold starts off in generic, subtle Americana fashion before a chorus straight out of Jagger’s repertoire springs up; it’s a little subdued but is nevertheless an enjoyable cut. Honey Slider then steps even deeper into Stones territory, sounding like a not too distant relative of Wild Horses from Sticky Fingers.

There’s a touch of southern rock evident for My Cousin Greg, another track where a bouncy guitar line drives proceedings, but the concoction of all four band members taking turns on lead vocals sounds a bit like an open-mic night down the local with the microphone being passed from friend to friend, and Katie Toupin’s section is, well, a little irritating if thankfully short. Her vocal contribution fares much better for the slow acoustic cut Gasoline, however, its harmonious chorus offering a sweet sounding detour from the main direction the album’s course takes.

Perhaps the best number on the album is saved for last: Darlin’. It’s an excellent, blues-soaked soulful effort boasting some captivating guitaring that you could see an underrated soulstress like Ruby Turner bellowing out at the top of her voice and making her own – superb.

The problem with Little Neon Limelight isn’t so much the quality of the songs, as they’re generally an intriguing bunch. It’s that it could be rather too eclectic a collection to listen to in one sitting. For once, the sum of its constituent parts is actually less than the individual parts themselves; until they can groom themselves into a fearsome, finely tuned pitbull – perhaps by muzzling one or two of the vocalists and keeping a tighter leash on the many influences – Houndmouth may have to sit and await their place at the table for a little longer.