by Laurence Day
published: 23 May 2014 in Album Reviews
Tweet 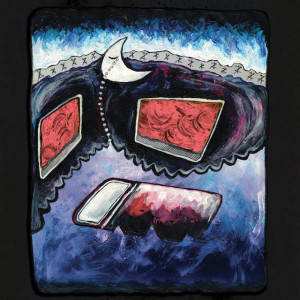 Hundred Waters are bristling and bonking shoulders with Less Than Jake on their way to the title of ‘Gainesville, Florida’s Most Famous Musical Export’ (lucrative, eh?). The muggy fug and Floridian sunshine clearly affects the two acts in different ways, with the ska-riddled pop-punks vying for sheer ADD-hedonism, and OWSLA’s Hundred Waters (yep, the label owned by Skrillex) preferring to fan themselves with waves of gloopy synthscapery in the balmy dusk.

Hundred Waters dropped their eponymous debut towards in the autumn of 2012, to acclaim from most sources, with many noting their innovative take on the tired route of folktronica – this lead to support slots with The xx, alt-J and others; not too shabby at all. Now they’re swanning back into our lives, lugging a fresh LP along with them. The foursome leave that “avante-folk” label by the wayside on their second effort – entitled The Moon Rang Like A Bell – opting instead for overtly synth-led shenanigans.

Akin to Halls or Douglas Dare, Hundred Waters mine the ‘South London Sound’ (previously known as post-dubstep), on tracks like Broken Blue. It’s a brittle paean, utilising the power of echoes to devastating effect – rather than plumping for out’n’out pop, as they were prone to do on their first full-length, they seem more comfortable meticulously adding layers, like surgical papier mâché. The layers they toy with are flower-pressing delicate, but fused together like some huge, terrifying sonic lasagne, they can form and conjure immense emotional depth. Chambers (Passing Train) utilises this too, building waves of pulsing bass, faraway kick drum and gargantuan pads. Once constructed, they meddle with dynamics and textures, not unlike symphonic post-rock acts do.

There is still a pop bent however, lurking in the shadows. Show Me Love, an a cappella ditty using methods reminiscent of Imongen Heap on Hide And Seek, brandishes heavyweight feelings and gospel hooks. Perhaps there’s less vocoder, but Nicole Miglis’ voice is left to fend for itself in the wilds of silence; she does so deftly, evoking a hymnal blues aura. Murmurs, rattling and creaking, brims with Cocteau Twins-ish dream-pop vox; Xtalk sees sped-up trip-hop beats and sublime R&B melodies converge upon synthpop bedrock; Out Alee is rammed with crumpled percussion and juddering rhythms – dance if you dare – but accompanied by Miglis’ beautiful layered harmonies, and the odd jigger of classic jazz piano, it becomes one of the album’s most intriguing highlights.

The Moon Rang Like A Bell is a triple-jump forwards for Hundred Waters. They’ve dislodged the suffocating tag of folktronica, and are dominating a sonic rivulet they can call their own – though they share similarities with other acts, they never feel derivative. It’s a struggle to actually affix a label to their sound – post-pop? – as they dodge and dart, ducking and weaving through myriad styles, never really lollygagging about in any one arena for too long. Whatever it’s called, it’s fabulous. It’s that potent mix of serenity, affection, atmospheric and absorbing that drags you deep into complex thought or comatose relaxation, ne’er to relinquish your immortal soul. Or something.