Hurricane #1 – Find What You Love And Let It Kill You 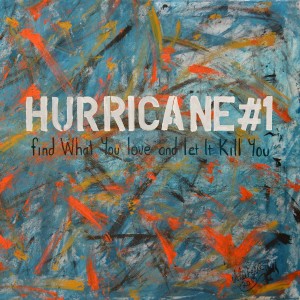 A festival at the Sussex University grounds of Stanmer Park in Brighton saw one of Hurricane #1’s earliest appearances following their 1996 formation after Mark Gardener instigated Ride’s break-up. Led by fellow Ride songwriter Andy Bell, a three-song set saw them kick off the main stage line-up for one of the day’s best performances that also saw a young Stereophonics, Shed Seven and headliners Levellers amongst the bands to follow.

Will Pepper (bass), Gareth Farmer (drums) and later Alex Lowe (vocals/guitar) were the other original members of a band first signed to Creation by Alan McGee but, arriving after the initial boom of Britpop that had already seen fellow Creation act Oasis release two huge albums, they instantly found themselves in the Manchester outfit’s shadow, critics dismissing them as simply a weaker version of the label’s biggest act.

Marketing issues were partly to blame for the vastly under-rated quartet’s lack of commercial success, a disillusioned Bell officially departing in 1999 to join, ironically, Oasis – as bassist – after a short stint touring on guitar with Gay Dad. Their legacy was therefore confined to two albums, the eponymous 1997 debut and follow-up Only The Strongest Will Survive from 1999. The albums were criminally ignored by many, spawning a track that should have been a Britpop classic – debut single Step Into My World – plus numerous other gems including Separation Sunday which contained guitaring far superior to anything found on any Oasis album, and Rising Sign, although the band shot themselves in the foot rather by including a far inferior version on the album to that of the superb extended single.

The new Hurricane #1, the resurrection being prompted by McGee, includes only Lowe from the original band (although Bell makes a fleeting contribution), presumably coinciding with Ride’s reformation for an additional boost. With Bell the previous chief songwriter (having written all but Lowe’s single contribution, the country-esque twang of What Do I Know? on the second album), the singer’s role takes on greater significance and it would probably have made more sense for the new incarnation to have been called Hurricane #2.

To appreciate the best moments of Find What You Love And Let It Kill You, an in-depth knowledge of the original band is probably not required as they bear little resemblance to Bell’s songs, bar the decent Feel Me Now Again, which is reminiscent of Only The Strongest Will Survive. The rockier, Oasis-like efforts such as Best Is Yet To Come and Crash are just your very average cuts this time round although the stomp of Where To Begin is better.

Of the best tracks, the summery pick-me-up of Think Of The Sunshine bounces along full of optimism whilst the enjoyable Has It Begun (Imitating Life) recalls What Do I Know? Round In Circles is simple yet effective, the acoustic guitaring of Heathen Mother is tinged with occasional Eastern sounds to provide another highlight, and the haunting atmospherics of the short title and closing track are stunning and totally unexpected. Nothing here will change your life, though, as much as you might want it to.

A former boxer, Lowe needed all of his fighting qualities to recently get through a battle with cancer, penning much of the new album from his sick bed. He hopes that the first Hurricane #1 album for 16 years won’t be judged or assessed, which is of course impossible, wanting people to simply listen and enjoy. Fortunately, there are a handful of songs here to be able to do that, if only fleetingly and not particularly in the original Hurricane #1 mould; for most of us though, we’re just happy to still have him around.