I Blame Coco – The Constant 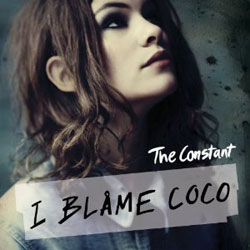 As a female singer-songwriter looking to make a name for herself and lay claim to originality, it was always going to be an uphill struggle for Coco Sumner. Not only is she introduced, without exception, as “Sting‘s daughter”, a reasonable charge given that she is, but she runs the risk of being bracketed off with the likes of Florence And The Machine, Little Boots and Marina And The Diamonds as another Brit-girl with a backing band and a shiny dress – and a late arrival to that scene to boot.

However, to do so would be grossly unfair. The Constant isn’t exceptional, but it does demonstrate a sophistication which sets her apart from the twee pop of some of her rivals.

Throughout the summer, the glorious synth-pop of Selfmachine was ubiquitous, and it is this which opens the album. The dystopian depth to the lyrics is rarely encountered in something so catchy and danceable. Coco has her cake and eats it, and it’s covered in musical hundreds and thousands. Brilliant debut single Caesar also makes an appearance, featuring Robyn, whose brooding chorus line hums across Coco’s paranoid verses.

Poise and sophistication abound, yet Coco manages to avoid being too cool for school. The bouncy bass and husky belting of In Spirit Golden, as well as the joyously shameless echoes of the ’80s in Turn Back On Your Love, make this album fun to listen to as well.

There is a decent variation in depth which ensures that it suits a range of moods. Playwrite Fate is a see-sawing, bouncy track that skips along harmlessly and is perfectly pleasant to listen to, if a little shallow. In contrast, Summer Rain is a moody beauty, whose hazy opening is gradually darkened by descending piano, building into something more Massive Attack than Marina.

Occasionally, Coco is out of her depth. Please Rewind breaks into a rock-chick chorus which wouldn’t look out of place on a Kelly Clarkson record. This is a genre which doesn’t entirely sit with Coco’s usual sophistication, and her delivery sounds a little too reserved for it to come off. Another mis-hit comes as the discordant opening of No Smile breaks into a kind of creepy reggae which seems to have all the disjointedness and hurried production of the dreaded “album track”. Lyrically, it’s characterised by a sulky morbidity with about as much profundity as an attention-seeking teenager. These two aren’t bad enough to spoil the album, but don’t rank among her best.

In many ways it’s a shame that No Smile is such a letdown, because elsewhere the reggae influence pays off, in Only Love Can Break Your Heart. Meanwhile, the title track exhibits a restrained, �ber-cool poise, slickly delivered with a dark minimalism to the arrangement that really works for her.

The self-confessed influence of The Killers on her musical upbringing is evident in Party Bag, a shimmering and slightly surreal anthem for partying to excess. Finally, the epic cheese of a string introduction grows into It’s About To Get Worse, a gentle, laid-back conclusion to an eclectic album.

While a few of its tracks are below par, The Constant is a decent first effort. It doesn’t put her head and shoulders above the many other female singer-songwriters kicking around at the moment, but it definitely sets her apart from them. Coco’s is a distinctive style which has produced some real gems, and this album is recommended listening.

I Blame Coco MP3s or CDs

I Blame Coco on Spotify