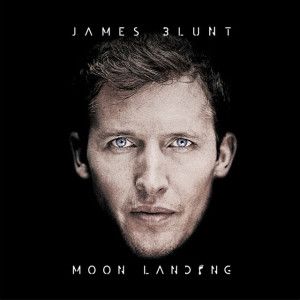 There are easy targets, there’s shooting fish in a barrel, and there’s James Blunt. Ever since the former army captain appeared to take over the world by telling us all about how his life is brilliant and an unnamed ‘angel’ on the Tube was beautiful, his name seems to have become the musical byword for the colour beige and treated with a fair amount of disdain.

Which is a shame, as he seems like a nice enough chap in interviews and has taken to displaying a winningly self-effacing attitude on Twitter of late. And, let’s face it, with a loyal army of fans, and three successful albums behind him, Blunt could, no doubt, care less for snotty music reviewers (he has, after all, had to face far more dangerous enemies in the past). Besides, it all seems rather futile now to just lazily slag off James Blunt – he is, and has been from the beginning of his career, pretty much critic-proof.

Moon Landing, his fourth album, sees him link up again with producer Tom Rothrock (who helmed his debut record Back To Bedlam), and is hailed as his most personal album yet. And while it won’t win over anyone yet to be convinced by the Blunt charm, it will certainly satisfy his many fans. It will, though, also give fuel to his many detractors, for Moon Landing is, for the most part, a sadly formulaic effort.

There’s that voice, for a start. To some, the sound of a man with his testicles being slowly squeezed by a vice, to others something far more horrific, Blunt’s falsetto is as high and tremulous as ever. After a couple of tracks you get strangely used to it, like a musical version of Stockholm Syndrome, yet it’s impossible not to wince when he goes for the high notes on songs like Miss America, a well-intentioned yet ultimately rather mawkish tribute to Whitney Houston.

To be fair though, Blunt knows how to write a pretty melody. Face The Sun is a quite nice opener, based on a poignant piano riff that builds up and up, and recent single Bonfire Heart has a stirring nu-folk arrangement that will appeal to anyone who’s a bit sick of Ho Hey by The Lumineers (which is, needless to say, everyone in the entire world). There’s also the genuinely touching Bones, with self-deprecating lyrics like “I have never been a beautiful boy, never liked the sound of my own voice” which powers along on a guitar riff that U2‘s The Edge would be proud of.

Elsewhere though, it all becomes a bit insipid and grey. Always Hate Me is, unsurprisingly enough, all about a bad relationship break-up with lyrics like “I never meant to hurt you, it’s just something I do, I guess it’s not a good excuse”. It’s presumably meant to be achingly personal and self-lacerating, but just comes across as a bit whiny. At least that provokes a reaction though, unlike the bland Satellites and the reggae-tinged Jack Johnson soundalike of Postcards.

Moon Landing will sell shedloads, and no doubt be appearing in many a Christmas stocking in a couple of months’ time. There’s certainly a market for anodyne, unthreatening, middle of the road pop, and Blunt appeals to that market very successfully. Yet those who look for music to move them, be it through the feet, heart or brain, probably won’t be surprised to find that there won’t be too much to appeal to them here.