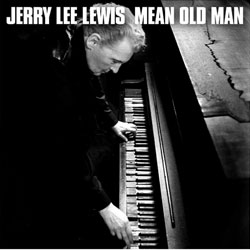 Few have made as indelible a mark on rock ‘n’ roll history as Jerry Lee Lewis. Starting with his earliest hits, Whole Lotta Shakin’ Goin’ On and Great Balls Of Fire, Lewis personified the rock ‘n’ roll mythos, channelling chaos, loose-wire energy, and scandalous debauchery in his early days. His rollicking combinations of rock ‘n’ roll, blues, and country music have been nothing short of archetypal, and, indeed, his work has at times been instrumental in the formation and evolution of the music.

Nearly half a century after he first pounded his “pumping piano” and scandalised the establishment, encouraging the youth culture to shake in 1957, Lewis is aged 75 years and sounding worn in but not retread. Mean Old Man – Lewis’s first album since being awarded the Rock ‘n’ Roll Hall of Fame’s American Music Masters Award in 2007 – finds Lewis leaning primarily on his country side, and surrounding himself with a staggering and expansive all-star cast of musicians.

Hearing Lewis’s voice – his once-tenor wail replaced with a hard-earned, weary baritone – it’s nearly impossible not to compare him to Johnny Cash. But, unlike Cash, who’s later recordings featured sparse instrumentation and the overwhelmingly sombre tone of a man apart, Lewis uses Mean Old Man as an opportunity to surround himself with collaborators.

Any time an album comes with such a lengthy list of guest spots, there’s the concern that the principle artist has worn thin, or – worse – lost credibility. Lewis, at 75 hardly looks like The Killer he once was. But the hard fact is that the man still has his killer instincts, and they’re on prime display here. Lewis’s baritone warble is certainly at centre stage, followed closely by his trademark barroom piano playing (which also seems to have dropped a few octaves, plunking where it used to plink). This album of covers brims with intensely organic and engaging moments, breathing new life into songs that could’ve just hung out like tired old windbags.

Mean Old Man’s 18 tracks are populated too densely to discuss them all. Among their contributers are Ronnie Wood, Mick Jagger, Ringo Starr, Willie Nelson, Gillian Welch, John Fogerty, and John Mayer. Sure, there’s a misstep or two (for instance, Rockin’ My Life Away features Kid Rock and Slash), but the album is mostly highlights. “If I look like a mean old man, that’s what I am,” Lewis sings on the album’s opener, which was penned by Kris Kristofferson. And you can tell he means it.

The Rolling Stones classic Dead Flowers takes on new weight with Lewis at the helm (with Mick Jagger’s spot-on harmonies threatening to cut the thing loose from its moorings). “I’ll be in my basement room with a needle and a spoon,” Lewis sings with haggard depravity. John Fogerty guests on Bad Moon Rising; this time it’s slowed down to a moderate thump, and sung as a warning from one who knows from bitter experience. Gillian Welch lends Appalachian winsomeness to Please Release Me, and I Really Don’t Want To Know. And the list goes on.

Even with such impressive help, Jerry Lee Lewis shows no signs of slowing down or leaning too heavily on his past. The album’s closer Miss The Mississippi And You, finds Lewis on his own – after the band has left, perhaps, and the janitor’s come in to sweep up – singing the gospel blues and yodeling to an empty studio, alone and careening. It’s something to behold.