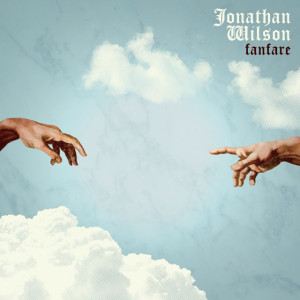 Fanfare, the second album by Los Angeles based singer songwriter and producer Jonathan Wilson is a serious proposition. While Wilson’s 2011 debut Gentle Spirit was as languid and beatific as its unassuming title suggests, Fanfare is this multi talented musician’s grand statement. It’s a follow up that shows a staggering degree of ambition and musical accomplishment burnished by first class songwriting in tune with the great traditions of American psychedelic rock and Laurel Canyon melody.

To help him create the album’s cavernous, prairie trek landscapes and lonesome plaintive laments, Wilson has called upon a number of contemporary like-minded friends and musical greats on an album high on collaboration. Wilson is a supremely well connected and influential figure in his homeland, a reputation enriched by the critical success of his debut. Burnished by that praise and an overall desire to swell his sound and his productions to ever more grandiose levels, Wilson and friends have captured something quite special.

Given the calibre of his collaborators, it’s no surprise that the album works so well as a coherent piece. A number of the songs were co-written with esteemed UK folk artist Roy Harper. These are no mere pastiches. Furthermore, there cannot be much more validation for a ’70s loving US songwriter than the presence on the album of David Crosby, Graham Nash and Jackson Browne. As well as these legendary figures Wilson has also called upon contemporary peers Josh Tillman (Father John Misty) and Taylor Goldsmith of Dawes. Also including members of Wilco and Tom Petty And The Heartbreakers, the final list of guests is nothing if not impressive. Yet despite the array of friends, Fanfare is very much Wilson’s glorious vision.

The album is immediately more satisfying than his debut. Fanfare’s grandiose Steinway piano intro is an immediate indication of Wilson’s celebratory and ambitious state of mind. His voice doesn’t even appear until four minutes in as the booming drums and graceful sweep takes hold. It’s transformative stuff. What follows is similarly panoramic and sweeping. Each track alternates between ornate and introspective acoustic folk to bluesy jams and gentle groove led rhythms.

There is a wonderful sense of freedom that enriches these pieces. Wilson is entirely unafraid to adorn a track with piercing, flaying saxophone as on the mesmerising groove of Fazon or numerous spacey phased guitar solos, such as Future Vision’s intense climax. The influence of Pink Floyd-ish psych rock is always prevalent in Wilson’s music. At times, he could perhaps be well served in exercising some quality control over some of his more meandering excursions, but that’s all part of the beauty of his music. He cannot help himself. Wilson is a musician who is defined by expression.

Fundamentally, Fanfare is a joyous album and a rousing celebration. Wilson describes the influence of the previous musical generation of Harper, Crosby, and Browne et al as being a key factor in the creation of this album. Fanfare is his own personal take and celebration of that music. Wilson describes these musicians as wizards and there is a certainly a wondrous quality to the music here. It’s all but impossible not to be enraptured by the glorious harmonies of the chugging rocker Love To Love or the spellbinding folk of Cecil Taylor.

Fanfare is the sort of album Jonathan Wilson was bound to make, immaculately crafted and perfectly defined. So much music is easily disposable and transient. Wilson’s Fanfare, much like his idols’ music that influences it, is completely timeless.