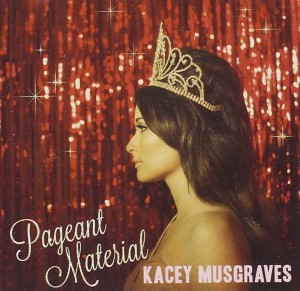 June saw the release of Pageant Material, the second album from Kacey Musgraves. It arrived amid a flurry of interviews that made much of Mugraves’ position as the ‘alternative’ country star, unafraid to touch upon hitherto-taboo subjects such as same-sex relationships and pot-smoking.

Accordingly, much of Pageant Material reads like a paean to non-conformity, starting with the title track’s admission “I’m not exactly Miss Congenial”. Elsewhere, Cup Of Tea picks up from Follow Your Arrow on her first album, the similarly excellent Same Trailer Different Park. Both songs resemble a more pragmatic take on Christina Aguilera’s Beautiful: “You can’t be everybody’s cup of tea … Nobody’s everybody’s favourite / so you might as well just make it how you please”. Family Is Family, meanwhile, is a plea for tolerance of one’s relatives that sounds like it was written through gritted teeth at the end of a particularly fractious meet-up: “Family is family, in church or in prison / You get what you get, and you don’t get to pick ‘em / They might smoke like chimneys, and give you their kidneys…”.

And yet, despite her many points of difference, Musgraves is firmly entrenched in the country mainstream. She got her first break on the reality show competition Nashville Star in 2007, and subsequently worked as a songwriter-for hire for superstars such as Martina McBride and Miranda Lambert. It should come as no surprise, then, to discover that Musgraves (with the help of a small team of co-writers) knows how to pen a cast-iron tune. Pageant Material abounds with gorgeous melodies, with the likes of Dime Store Cowgirl, Late To The Party, Miserable and Fine likely to find admirers among those who wouldn’t normally countenance listening to country music. (Miserable, in particular, would have slotted in nicely into the second half of Taylor Swift’s 1989.)

But Pageant Material is, above all else, a country album. Family Is Family, the title track and the ultra-catchy Biscuits are foot-stomping, rabble-rousing numbers which adhere to country music’s exacting standards of storytelling. Those who are instinctively resistant to the genre’s tropes might struggle a bit with these numbers, so it would be inaccurate – though tempting – to describe Pageant Material as ‘country music for people who don’t normally like country music’.

Nonetheless, listeners with open minds are strongly recommended to give Pageant Material a try. It’s brimming with wit and wisdom, and it really should have featured on more end-of-year lists.