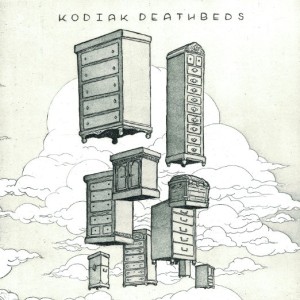 “Mindful disengagement from self-perpetuating chaos” is how wispy vocalist Amber Webber has described Kodiak Deathbeds, her latest venture away from Stephen McBean’s excellent Canadian rock collective Black Mountain. Although it’s not really ‘hers’ as such; Cave Singers guitarist Derek Fudesco was the catalyst for the duo’s collaboration when he approached Webber at one of his band’s gigs.

Fudesco subsequently sent Webber a couple of songs he was working on and she liked what she heard, the draw perhaps being that it was all rather unlike anything she had been involved with before. Sparse finger-picked guitar, mainly acoustic, formed the basis of Fudesco’s music, a far cry from the thunderous rock of Black Mountain or even the synth-washed tones of another side project, Lightning Dust.

The album was recorded by Colin Stewart at his studio in Vancouver, already familiar to both artists from their time with Black Mountain and Cave Singers, but he also has many other notable notches on his portfolio such as The New Pornographers, Sleepy Sun and another McBean fronted outfit, Pink Mountaintops. In Kodiak Deathbeds’ case, though, input required from third parties is likely to have been as minimal as the music itself, which remains simple throughout this self-titled début long player.

Many songs surfaced prior to the album’s release, two of the earliest being Rattle And Roar and We Found A Home. The former boasts jaunty acoustic guitar of the kind that could well adorn an American film set in the country during times of slavery until Webber’s beautiful vocal appears like an angel’s touch. It’s basic but stunningly effective and her soft, distinctly melodious tones elevate the song considerably. The latter closes the collection in similar fashion, with electric finger-picked guitar this time providing the backdrop for that gorgeous voice.

Album opener Never Change is arguably the best song here, strumming acoustics blending with delicately hushed and quivering vocals set to a delightful melody, enhanced further by backing vocals layered in a chorus effect. Cross That Line is another strong offering, but it starts to become obvious not too long into the collection that when you’re confronted with little else that’s notably different other than melody, this aspect becomes all the more important. Unfortunately, though, the melodies aren’t always strong enough to deliver something that’s likely to trigger numerous plays.

Wild Hearts is another thing of much fragility, but this time the quivering vocal recalls Webber’s early contributions to Black Mountain, the quiver a little too wavering and weak for comfort. Gemini sounds a little medieval whilst Borderline relies more heavily on Fudesco’s finger-picking and, as gorgeous as Webber’s vocal tones are once more, the lack of anything in the way of percussion has become a little tedious by this stage.

Borderline enjoys a rather pleasant chorus to break up the chopping acoustics, and some slightly heavier electric guitar work in Joseph deviates from the template ever so slightly but again, like virtually everything here, it sounds more like the kind of track you would enjoy in a live setting as a break from heavier, full band efforts.

And that’s Kodiak Deathbeds in a nutshell, really. Webber’s angelic vocal tones are undoubtedly the biggest attraction, but over the course of an album the sparse, samey formula wears thin. To the casual listener, it’ll probably gather dust on the shelf a little too quickly but for those that cherish the voice, the simplicity of it all and the deviation from heavier sounding rock it might provide a refreshingly welcome change. It’s an album that will either leave you feeling bored and in need of a loud injection of noise, or it’ll sound like the best campfire or busking performance you’ve ever had the fortune to stumble across in your life.