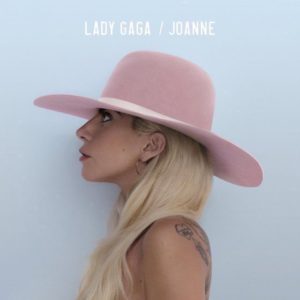 Lady Gaga and the New Simplicity. It sounds like a plausible band name – but it also works as a summary of where Stefani Joanne Angelina Germanotta is right now.

The first of her middle names gives a title to her fifth album – which also happens to be the name of her late aunt. It is one of many indications that this time she wants to dip under the radar she sought so actively with The Fame.

Gone is the bulk of the music’s sheen and the big, attention-seeking choruses. Gone for the most part, too, are the reports of unconventional behaviour and the extravagant outfits, though it seems Gaga can’t resist one of those now and again. In their place are sleeked back hair, little to no make-up, relatively normal clothes – and a renewed emphasis on songwriting, pure and simple.

This bread and butter approach, turning the focus squarely towards the music, suits her well and if anything enhances her credibility. Diamond Heart sets the stall out for the newly sterilised artist. “I might not be flawless but you know I got a diamond heart,” she sings in direct tones, astride a basic, almost wooden production that makes a direct play for the emotions.

The new depth of feeling is also evident on Million Reasons, where she sings, “I got a hundred million reasons to walk away…but baby I just need one good one to stay”, and also on the title track, channeling an inner Lana Del Rey seemingly in memory of her aunt. “Every part of my aching heart needs you more than the angels do,” she sings powerfully over the barest of guitar accompaniments. It is a strange combination, the booming vocal and the restrained strumming, but an effective one nonetheless, like singing with the caps lock on. Come To Mama is equally affecting, again going for substance over surface.

Elsewhere Joanne is not always so straightforward, and this is often due to its horde of collaborators. Mark Ronson may hold the reins for much of this record but it has a heavyweight guest presence, bringing some intriguing creative minds to the table.

Father John Misty helped to write Sinner’s Prayer, which has an outdoor twang to its guitars that we’ve not heard from Gaga before. Josh Homme contributed to A-YO, with its frisson of rebellious attitude, and also John Wayne, which feels a bit more contrived. Kevin Parker, meanwhile, has a writing credit for Perfect Illusion, described by Ronson as “a cross between Tame Impala’s Let It Happen and Bad Romance”. It is one of the more obvious bangers on the album with its head nodding drum beat and hands-in-the-air chorus. Late on comes the much heralded collaboration with Florence Welch, Hey Girl – which in reality is too much of a good thing, power vocals winning over substance.

Most striking of all is Dancin’ In Circles, a collaboration with Beck. In it Gaga plays around with innuendo over a faux reggae backing that sounds like a slowed down, off-key Alejandro. “I lay around, touch myself to pass the time,” she says, but in truth she sounds restless, even bored. “These boots want to beat around, funk me downtown,” she proclaims.

It is not a full reflection of the album though, which is for Lady Gaga a rediscovery of her artistic heart and soul. She may flit from one musical style to another, rather like Madonna has always done, but she never gives anything less than total commitment. The less is more production suits her, and for a first time we get a real and lasting glimpse of Stefani herself.