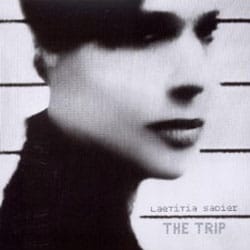 When Stereolab announced they were going on indefinite hiatus, other projects from individual members of the band were initially promised in manager Martin Pike’s farewell note. It’s taken a year and a half for his statement to come true – they split in April 2009 – but Laetitia Sadier, a founding member, is the first of the gang to go solo. That said, this isn’t her first attempt at her own material. Monade, an earlier solo project, never really hit the ground running. As such, The Trip is her ‘official’ debut.

And it is remarkably brief. Given that in her past musical life the typical length of a Stereolab record would be around the45/50 minute mark, it feels weird, in comparison, to listen to a record that clocks in at just over half an hour. Its simplicity is also notable. It feels stripped down and spacious in comparison to the kaleidoscopic nature of her past work. This brings Sadier’s songwriting to the forefront, giving her a great chance to show off her talents.

Sadly, the end result is an album that isn’t anywhere near as cohesive as it should be, though the second half is considerably better than the first, and it takes a while to properly get going. Take a song like Natural Child, which is very relaxed and laid back, but amidst the music it sounds like Sadier is trying desperately hard to find her own voice whilst recording. In contrast, Another Monster features very spooky sounding Portishead-style guitar work and she sounds considerably more comfortable and at ease.

What’s more fascinating though is that two of the best songs on The Trip are not originals but cover versions. Her take on Wendy & Bonnie‘s By The Sea has a lot of intent and purpose behind it and the music is less plain than on most of the other tracks on the record, whilst Les Rita Mitsouko‘s Un Soir, Un Chien, sung unsurprisingly in French, is driven mostly by electronics and is a fairly enjoyable dose of funk. Perhaps the album would have been more of an enjoyment if Sadier had written more songs like those, or at the very least ones that matched the quality of the covers.

There is definitely some promise in Laetitia Sadier’s solo work, but the material here feels more like rough sketches than finished product. That said, if you were a Stereolab fan and have withdrawal symptons, this will definitely satisfy your curiosities. If The Trip was the equivalent of an actual road trip it would be a rocky and unstable one to start with before smoothing out as it reaches its destination. With a little more consistency, Sadier could be quite the solo artist.