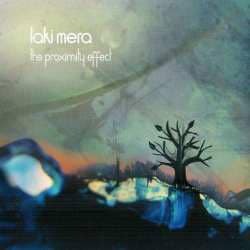 Scottish quartet Laki Mera may take their name from Greek mythology but their sound is rooted firmly in a modern world dominated by restrained arrangements, inoffensive synth patterns and airy vocal melodies. The Proximity Effect is their debut album, following the earlier release of an EP which garnered generous comparisons to fellow Scots The Cocteau Twins, a comparison only really accurately illustrated on opening track The Beginning Of The End, which is dominated by singer Laura Donnelly’s crystalline, processed vocals. It ensures the album opens with a sense of ethereality which sadly is never really recaptured again on the album.

The spritely More Than You and melancholic Double Back soon follow, arguably being two of the strongest tracks on the album. Like much of the album however they have a sort of undemanding, unexacting quality to them, with the honeyed vocals possibly helping gloss over the shortcomings of elsewhere. Double Back in particular, with its moderately soul-searching lyrics has a tender vulnerability to it, something which could equally be said of Solstice, a track of mellow femininity which features Donnelly repeatedly singing “someone help me out here” to a drifting musical accompaniment.

Fingertips has an agile lightness to it and Fool fares slightly better, even coming close to recalling The Sundays or the pop sound of The Bird And The Bee. We see a modest increase in pace on Onion Machine but already the impression is beginning to form that the arrangements may just be too unblemished, a little too clean and in places almost a little bereft. In particular How Dare You and Crater both come across as overly timid and uncluttered, almost apologetically so.

This makes the appearance of the instrumental Pollak Park in the second half of the album even more welcome, boasting significantly more in the way of driving rhythms and softly propelling synths which help shake the album out of its momentary slumber. It carries much more weight and casts a far greater presence over the album, which up to this point seems to have been excessively haunted by the ghost of trip-hop. Unfortunately many of the tracks on the album segue into each other in an almost indistinguishable manner, and some stray dangerously close to being soporific. The Proximity Effect may contain occasional moments of prettiness, but even after repeated listens it is hard not to crave more in the way of variety and substance.