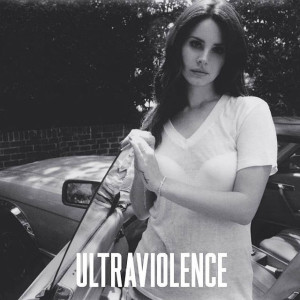 Ultraviolence remains steadfastly in character. In case you were wondering, Elizabeth Grant is still playing the role she did on Born To Die. How you feel about that is probably already decided. Nothing that happens here will convince you it’s a good idea, should you hate Grant’s unswerving devotion to the untruth that is Lana Del Rey. Conversely, if you’re less than worried about the idea of a musician playing a part, it’s hard to deny that Ultraviolence is a better backdrop for her poses than Born To Die was.

It is musically defter and subtler than the previous album, if not entirely dissimilar in terms of atmosphere. The pace is slow, the colours are faded and the feeling of doomed romance hangs around the record like bequiffed ne’er-do-wells about a bowling alley.

At times, it’s appealing.The title track is great: a mournful lament with a dim glow of glamour. Burdened with, but not overwhelmed by, drapes of cinematic strings. Sad Girl has echoes of Fever by Peggy Lee, both in terms of finger-clicking sparseness and height-of-the-summer, sweaty closeness, while the faintly processed drums underpinning Fucked My Way Up To The Top shows that Del Rey isn’t entirely unaware of events post small-town 1960s Americana, and give it a pleasingly sharp edge.

Plus there’s no doubt, she can sing. Or, more accurately, that she’s a vocalist of real personality. There’s an increased confidence in her own voice and, when they leave it stripped down and left alone, as on across Pretty When You Cry and Old Money, the image that it creates of Del Rey as the lonely nightclub singer pushed out into the spotlight, voice cracking on the edge of breakdown, is close to moving. Which is not something you can always claim of the faintly somnambulist delivery elsewhere.

The biggest problem with Ultraviolence is that more often that not, the voice really has got fuck all to say. The lyrics are either dreadful or some tremendous joke that everyone has totally missed due to the immaculately straight faced delivery. Del Rey’s ability to make you question which bodes well for her poker game, at least.

There are lots of mentions of drugs, Brooklyn Baby has an unhealthy obsession with beat poetry, while Shades Of Cool is just plain bad. Darting between focusing on extraneous detail (“He lives in California too / He drives a Chevy Malibu”) and heavy-handed characterisations of bad boys with hearts of gold (“He loves his drugs / he loves his baby too”) it keeps the rhyming at a pre-school level.

But on balance, Ultraviolence is ok, tending towards pretty good. However, there is a nagging wonderment over exactly where Del Rey goes from here. As femme fatales go, you can’t help but wonder if this one isn’t fatally flawed. For the moment though, the latest chapter in the peculiar tale of Lana Del Rey still just about holds your attention.