by Graeme Marsh
published: 3 May 2015 in Album Reviews
Tweet 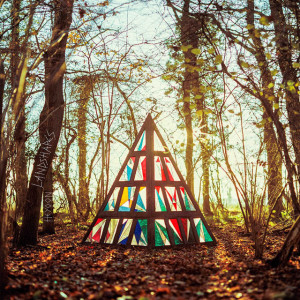 Landshapes are an unconventional lot. A tropical tree and its fruit gave the London quartet the name for a debut album in 2013 – Rambutan. Second offering Heyoon now arrives, its name sprouting from a secret pavilion in a place called Ann Arbor in Michigan where youngsters would congregate and smoke pot, and do all the other things youths would get up to once outside of parental and school confines. It’s actually a privately owned structure of a family named Heydon and the ‘secret club’ had continuously cocked-up the name.

Bizarrely, Landshapes also take their name from a cock-up, this one being from a Paris gig where their original name of Lulu And The Lampshades was misprinted on the billing. Admittedly, lampshades aren’t the most interesting things – unless placed over the head of the local lunatic when taking their hoover for a walk down the road, before men in white coats carry them away. No wonder they decided to ditch their first name; but equally bizarrely is that they too have been snapped wearing all white outfits – are they loons themselves or are they doctors, here to cure our thirst for something new? Their music hints at both.

For Heyoon, they sing about “lost practices, hidden worlds and secret topics”. To lend support to the oddball camp, there’s even a song about interplanetary geese courtesy of lead single Moongee. Starting off with a single note that threatens to lead into hula-hula territory, a grungy beat then kicks off alongside wailing and spindly, spidery notes for a slow trudge where a spacey Eastern sounding hook marries with rubbery bass and Luisa Gerstein’s floating vocal to hypnotically intriguing effect – whatever the catalyst for the track is, it’s certainly a fascinating effort. Then there’s Ader – a tribute to a late Dutch visual artist, which bounces along neatly for a more conventional cut, its compellingly shimmering, bubbling synth sounds recalling manic steel drum playing. Not your usual well of inspiration for tunes, then.

Lone Wolf is a more minimalist affair but Gerstein’s high pitched vocal alongside skeletal guitar and soft percussion fails to ignite the track. Similar guitar tones feature for Fire, and it’s only really a more uplifting chorus that offers anything of interest during a song of strange sounds and a touch of eccentricity. The oddities continue in the shape of Solipsist, a pace changing effort that closes the album with more weird sounds.

The upbeat Francois fares better, its mesmerising vocal melody blending neatly with a simple guitar line that sounds something like Cocteau Twins jamming with ‘80s forgotten goths All About Eve. The atmospheric slow burning gem Red Kite is another highlight, with its five-note descending hook and fuzzy guitar presence kept in check by a stunning vocal performance by Gerstein – imagine Dido given an octave lift.

But it’s a couple of songs that act as microcosms for the band’s entire presence that attract most attention. Opening track Stay begins to dark and mysterious guitar fuzz, a melody you could see Ladytron hammering out on their keyboards, before developing into a bouncing beauty, another rubber bassline and screaming guitar fuzz propelled forward by energetic drumming. But then, two thirds of the way through the track, it stalls, continuing its journey in stuttering, crawling fashion. Desert opens to pummelling drums and jangly guitar for an extended instrumental intro, with see-sawing fuzzy guitars and The Twilight Zone like mystery before launching into a shimmering guitar section – and then it derails itself for quiet, unexpected breaks between starting up again.

Since Rambutan, they’ve apparently ‘bonded’ more with their instruments , proving that it’s amazing what a spell away from the Big Smoke in a remote Cornish cottage can do. But it’s the effects that shape the band’s sound more than anything else; Heyoon is an often confusing collection that depicts a mad mind, but one that at times offers enough intrigue to warrant attention.