The Leisure Society – The Fine Art Of Hanging On 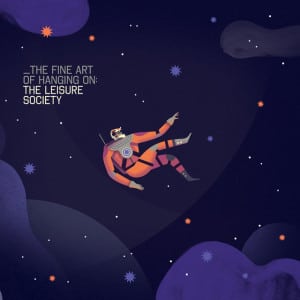 Quietly, without much fuss, and without anyone really noticing, The Leisure Society have gradually evolved into one of the most consistent bands in the country. They may not have quite hit the sort of ‘national treasure’ status that’s readily dubbed onto Elbow, but for those in the know, a new album from Nick Hemming and company is always something to look forward to.

The band’s fourth album, The Fine Art Of Hanging On, marks a bit of a departure for them. Instead of their usual folk/rock sound, there seems to be a move towards baroque, chamber-pop at times – it’s reminiscent of the The Divine Comedy at times, of the likes of Sufjan Stevens or Rufus Wainwright at others. Yet with an Ivor Novello-nominated songwriter like Hemming at the forefront, the songs are as beautifully well-crafted as ever.

There’s also a loose concept running through the album as a whole – many of these songs were written as a close friend of Hemming was dying of cancer. So, from the album’s title down, a theme can be read into the record: the desire to keep hanging onto things: be it life, a good relationship or a job you love, and to embrace our time before its too late. It may sound depressing or maudlin, but in its own understated way, it becomes rather lovely.

The opening title track builds beautifully – beginning with a lonely, eerie synth line, before exploding into life for the chorus: it does sound a little bit dated, bringing to mind the Mumford And Sons-led nu-folk revival of 2010, but you can’t deny the energy and exuberance on display. Ten Black Cabins shows off the band’s more downbeat side, to gorgeous effect: it’s a gloriously hypnotic ballad, employing some atmospheric strings and a haunting piano line. There are touches of Conor O’Brien’s Villagers in Hemming’s vocal, or that of John Bramwell of I Am Kloot.

So far, so The Leisure Society. Yet there are genuine surprises on The Fine Art Of Hanging On for long-term fans. I’m A Setting Son is the most memorable moment, mainly due to it’s almost glam-rock beat and fuzzy guitar riffs, augmented by a blasting horn section, and a disorientating switch of tempo towards the end – it’s one of the big highlights of the album. Wide Eyes At Villains is another little gem, taking its time over five and a half minutes to slowly unfold and display big brass flourishes and more of those swooning strings. It’s at times like these you realise why Hemming is so highly rated by his peers.

Some people will remain perplexed – this is still, to all and purposes, a traditional, ‘classic’ sound, and anyone wanting to hear something revolutionary will probably be disappointed. Yet during the album’s closing track, an acoustic strum called As The Shadows Form, something draws you in to listen even more closer: and, as Hemming sadly sings lines like “all this may just keep you sane as the shadows form around you….I know this has to end, I know that this must be the end”, you’re reminded of the dying friend who inspired the album, and the emotional impact is like a punch to the gut. It’s moments like this that confirm Hemming to be one of our most underrated songwriters.