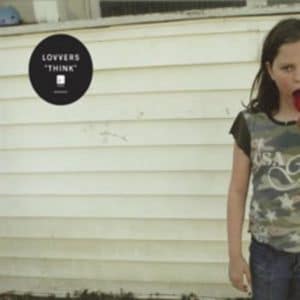 Since its inception, the rallying cry behind the punk rock movement has been that anyone can be in a band, anyone can play music, anyone can perform onstage.

The corollary left off of this inspiring assessment, though, is that most of this music will be god-awful. It’s true Paul Simonon couldn’t play an instrument when he started with The Clash (he was, in fact, chosen for his looks), but listening to his work, you realise how far he must have come.

Some have the knack to rise above the teenage “fuck all authority, we’re going to play loud and fast” mentality; others embrace this for their whole career, learn to perfect it, and do it well. But, no, you and your mates cannot get together for a couple weekends and come up with the next Clash, Sex Pistols, or even Ramones album.

Lovvers are the most recent band in trying to evolve traditional punk with modern influences, but their approach falls flat. They stay true to the two-minute punk song, but they take a risk in releasing seven songs at a full album price: are these offerings such glistening morsels of nectar and ambrosia that they should justify this price? Certainly not. The songs come in piecemeal fashion and should be approached with caution.

No Romantics swings back and forth between somewhat catchy instrumental riffs and clumsy sections of vocals scowled out over crunchy noise. Lovvers here try to evolve punk out of its three-chord home, but fall flat. The Kids (Laugh Out Loud) skips across time signatures without sensibility, and No Fun mashes two separate sections into one song, sounding like Lovvers simply didn’t want to take the time to develop these into two distinct full-length songs.

This is not to say that experimentalism should be shunned in favor of traditional song values – it’s just that better bands have done these sorts of experiments much better in the past. Such composition tricks might impress a handful of teenagers who haven’t yet discovered Black Flag or NOFX, but Lovvers will probably not appeal to many more people than that.

The disjointed nature of Lovvers’ songs also extends to the album overall. The tracklist seems hobbled together without rhyme or reason, except that the best songs start and end the album (one of the only encouraging aspects of the whole affair).

Album ender Talk Cheap shows great promise: a single riff introduces the song and morphs through different sections, leading everything along on an appropriately discordant track. Everywhere else on Think, though, Lovvers feels like they’re trying too hard. The only other salvageable track, Human Hair, doesn’t flow nearly as well as Talk Cheap.

A band with virtually intelligible lyrics should let the music speak for itself. Unfortunately, there’s not enough of a musical impact on Think, even though it sounds like Lovvers could put on one hell of a live performance.