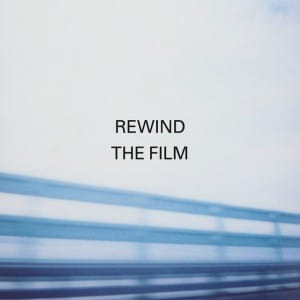 On The Holy Bible the Manic Street Preachers used a sample from an interview with Hubert Selby Jr on Of Walking Abortion:

“I knew that some day I was going to die, and I knew before I died two things would happen to me. That number one: I would regret my entire life. And number two: I would want to live my life over again.”

Rewind The Film finds the band in a similar frame of mind; reassessing and wishing to relive it all again. Knowing that this is not an option, they’ve instead opted for change, something they’ve done frequently over the years. From punk loud mouths, through GnR glamour, into the new-wave barbed riffs and terrifying aesthetics of The Holy Bible, and from there into stadium rock gods, they’ve constantly adapted to circumstance and taken control of their aesthetic and destiny.

Rewind The Film deals with the nature of growing older, unavoidable change and death, yet on the surface, this is the most accessible album the Manics have ever released. There’s barely an electric guitar on the album, the band favouring acoustic guitars, smart string arrangements and brass accompaniment. This might sound safe but the weight of this album is within the lyrics. Opening with This Sullen Welsh Heart, the band instantly lay out the conundrum before them. “I don’t want my children to grow up like me” might sound like the lament of a poor role model, but it’s the process of growing up at all that’s being addressed. If the band might sound defeated in the line “I can’t fight this war any more, time to surrender, time to move on” they offer hope too with “the act of creation saves us from despair”.

It’s safe to say that this is at times a confusing album but not one borne of midlife crisis. “I hate middle age, in between acceptance and rage” they sing on Builder Of Routines, clearly not ready for acceptance just yet with the band retaining their anger and will to create. For now they’re on the middle ground between accepting their past and rejecting it. Builder Of Routines sees them stating they’re “so sick and so tired of being 4-real” whilst Anthem For A Lost Cause is a song about idea that music no longer has the power to mobilise generations as the Manics believed it did when they first started out. The world has changed around the Manics. Some of it they can control and some of it they can’t; once again they must adapt to survive, as they have in the past.

The title track examines the reality of impending death and wanting to live life over again. It utilises the dour but warm tones of Richard Hawley’s voice perfectly in a haunting lullaby. Interweaving lines like “I want to feel small, lying in my mother’s arms, playing my old records, hoping that they never stop” and “rewind the film again, I’d love to see my joy, my friends” with beautifully orchestrated strings as the song progresses adds an almost unbearable emotive weight which surely registers as upsetting as anything they did on The Holy Bible.

Elsewhere, loss and death hangs heavy over the album. As Holy As The Soil (That Buries Your Skin) is a quite beautiful song for Richey Edwards. It’s almost hymnal in places despite the interjection of some soul horns that somehow sound simultaneously jubilant and sorrowful. “I love you so, would you please come home?” sings Nicky, it’s hard to hear and not consider that this is a song not really meant as a mass communication but a love letter put out into the world for just one person to hear. 3 Ways To Despair addresses similar but slightly less personal themes. Written about Stuart Adamson (Skids and Big Country) who committed suicide in 2001, when Bradfield asks “Can you save someone from their hidden depths?” he could easily have been thinking about Edwards too.

Despite the heavy tone of the lyrics, there is plenty of melody to be found throughout the album. Show Me The Wonder is something of a soul-pop sensation despite its lyrical content. Nicky’s paean to Tokyo (I Miss The Tokyo Skyline) is heartfelt and changes pace with electronica atmospherics bubbling beneath the surface. They even find time to rekindle their political streak with 30 Years Of War, which attacks the “endless parade of Etonian scum” that populates the Government. It’s the kind of sentiment that the Manics of old would have applauded and it indicates that there’s still fire in the bellies of Wire, Bradfield and Moore; but alongside a series of songs that concern more personal themes, it doesn’t quite fit. Yet, 30 Years Of War aside, this is an album that finds the Manics in fine form. They might not be able to live over again, but if they keep on like this, their story is far from concluded.