Marnie Stern – The Chronicles of Marnia 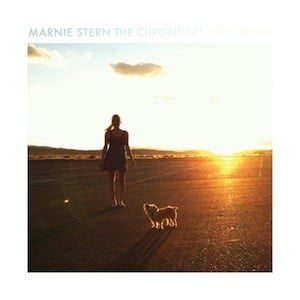 It’s a new, lighter, start for Marnie Stern, as evidenced by that pun-tastic album title. When we last heard from the New Yorker with her third self-titled album, she was mourning the death of an ex-boyfriend, a ghost which hang heavy over the whole record.

That album turned out to be one of the best records of the year, but a more carefree Marnie is no less compelling. The key elements of her signature sound are all present and correct on The Chronicles Of Marnia – the jaw-dropping guitar shredding, that high-pitched yelp of a voice – but these 10 songs have a lightness of touch about them that make this Stern’s most accessible, and most enjoyable, album to date.

Long-term Stern watchers may have been worried by the departure of drummer Zach Hill (who’s left to concentrate on Death Grips full-time), as his hyperactive technique seemed wedded to Stern’s sound. Yet his replacement, Kid Millions of Oneida, is a perfect replacement, often matching the ambidextrous skills of his predecessor.

Most of all though, it’s the songs collected here that make this such a delight. Opener Year Of The Glad hurtles in like a statement of intent, and only sets the scene for what’s to follow. Stern’s vocals won’t be for everyone – at one point on Year Of The Glad she appears to be impersonating a monkey – but the exhilarating rush is matched in several tracks elsewhere.

“Everything starts now” she proclaims in that opening track, and lyrically, messages of positivity and renewal abound. Her vocals seem further forward in producer Nicolas Vernhes’s mix, a trick which comes to full, thrilling, potential in Immortals, an adrenaline-fuelled dash which marries some breathtakingly good guitar riffs with a glorious chorus of “Immortals don’t die!”. It’s a song that gets better each and every time you hear it.

That’s just one of many highlights though – the life-affirming cry of “don’t you want to be somebody” of Noonan, the career-best guitar playing in You Don’t Turn Down and the jerky math-rock of Still Moving. Best of all is Proof Of Life, maybe the best thing Stern’s ever recorded, which mixes portentous piano chords with some head-spinning guitar work, before exploding into a chorus of “I am nothing…I am no one”.

East Side Glory sounds like a close cousin of Yeah Yeah Yeahs‘ Maps, and instills the same air of bruised defiance, while the closing Hell Yes makes for just as emphatic an ending as Yeah Of The Glad was an opener. The two bookmark Stern’s best album yet – at just over half an hour, it’s a short, sharp shock to the system which contains some of Stern’s best songs to date.