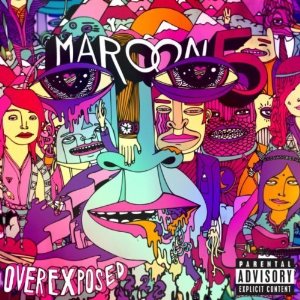 If ever the influence of a single song was writ large over an entire album then it is with Maroon 5’s fourth album Overexposed. 2011’s mega hit Moves Like Jagger rejuvenated the band’s career and returned them to the upper reaches of the charts on both sides of the Atlantic. It is that song’s highly successful template that the band have now taken as the basis for Overexposed. Yet while Moves Like Jagger has an undeniable and inescapable charm to its ebullient pop strut, Overexposed struggles to repeat the trick over the course of a full album.

As if to underline the song’s importance to their supercharged pop reinvention, it has once again been tagged on at the end as a bonus track. The effect of placing their one stone cold amazing pop hit at the end means everything that comes before struggles to convincingly match up to its brilliance. Perhaps they would have been better leaving it off completely.

Overexposed sees Maroon 5 changing their writing methods and working with outside songwriters for the first time. The names of Ryan Tedder, Shellback, Savan Kotecha and super pop producer Max Martin have been attached to any number of pop records over the last 15 years and their influence can be heard throughout as the album goes for the pop jugular from the very start.

Opening track One More Night is a Max Martin produced slice of pop reggae, a little reminiscent of Rihanna. Adam Levine’s slightly grating voice though has none of her icily detached Bajan cool, and the overall effect is rather stilted. It is a common feature of much of Overexposed: it sounds fittingly contemporary, but diluted. Current single, and the group’s first UK Number 1, Payphone is far better. The emotive hook is among the album’s best and there is a welcome purity to its soaring chorus. A guest rap from Wiz Khalifa adds a hip-hop element that works surprisingly well. Maroon 5 certainly know their way around a pop melody after almost 10 years.

In its attempts to embrace a more overt and vibrant pop sound, Overexposed’s flaws become more obvious. The production is excellent and as slickly smooth as can be imagined; however, the direct pop rush means everything is shot through and dashed off very quickly. There is an alarming lack of subtlety. Almost all the 12 songs here are coated in bludgeoning synthesisers and a relentless dance pop beat with Levine barely pausing for breath as he delivers hook upon hook.

Most of the album’s best moments come when Maroon 5 ramp back ever so slightly the exuberance. Love Somebody, despite some typically clichéd lyrics, has a lovely keening melody and chorus with Levine’s falsetto vocal shining. Lady Killer is an excellent piece of smooth and slinky soul that goes some way to successfully recreating Moves Like Jagger’s strutting swagger. Beautiful Goodbye is the one exception to the pop banger ideal. It is a gorgeous, easygoing pop strum that is perhaps the most honest and heartfelt moment on the album. A few more of these moments would’ve been welcome.

There is a nagging feeling throughout Overexposed that Maroon 5 are not quite being themselves and they are appropriating different aspects of everything that works, or at least sells, in contemporary pop. Perhaps Levine’s role as a judge on the US edition of The Voice is something to do with this. There are moments that sound very much like the anthemic pop of Katy Perry and the downbeat piano ballad Sad apes the emotive balladry of Adele‘s Someone Like You. By far the most irritating aspect of their magpie-like approach though is the overuse of a “Whoah, whoah, whoah” vocal which features in almost every song. It is one of pop’s most common tricks – see Coldplay and Take That – and one which Levine and co have taken to an overwhelming extreme here.

As is common with most pop albums, especially when the band have progressed to the rarefied status that Maroon 5 now enjoy, Overexposed is rather patchy and its highs are countered by some fairly wretched lows. There is no doubt though that Overexposed will sell in huge quantities, but as a document of their newfound status as global straddling pop kings it flatters to deceive.