Megadeth – The System Has Failed 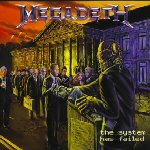 Having suffered more setbacks in his lifetime than most would care to face in three, Megadeth (a.ka. Dave Mustaine) return to the metal arena. Mustaine’s three year hiatus has been spent recovering from crippling nerve damage to his arm which threatened to end his career.

Starting as they mean to continue, the album opens with a newsflash (by the way boys, this was once cutting edge, about 10 years ago!) informing the listener: ” Air Force One was shot down over the middle east…The president is presumed missing..Our nation stand at Defcon 3.” Blackmail the Universe sees America’s foreign policy cynically ripped limb from limb betwixt searing solos from Mustaine and recently reinstated original guitarist Chris Poland.

First single Die Dead Enough is very late ’90s territory for the veterans, and is a sure fire radio number. It’s all chorus and not a whole lot else but is about as sticky as toffee on a summer day. Not two but three solos adorn this slice of classic ‘Deth.

Taking corruption back to its traceable source, Truth Be Told is a case study in mans greed from Cain and Abel to the present day: “Before al Qaeda and Bin Laden..the verdicts always been the same, Wrong!” with all this history to cover you’d imagine there wouldn’t be much time for string twiddling huh? No fear, six soliloquies squeezed into five and a half minutes of old skool thrashy beats.

Unfortunately Mustaine’s politically fuelled wrath doesn’t always transfer so easily to such strong tunes, as Kick The Chair proves. If there’s something to be said for the corruption of the courts, there are I’m sure more eloquent ways of doing it. It seems without taking a hard line attitude to your music and lyrics (a la RATM) it is nigh impossible for your political ranting to be taken with any clout.

That said,I have somewhat of a sneaking suspicion that including songs entitled Back In The Day which addresses the history of metal with the following eloquence: “In denim and leather, we were all part of the force, knocked Rock and Roll on its ass and put Metal on the coure.” alongside your social commentaries probably doesn’t aid your course either.

Of Mice And Men is somewhat of an autobiographical account of the highs and lows of Mustaine’s life, charting his rise and many falls throughout his chequered past. It is at this point that Megadeth ran out of material, at least that’s the only excuse for Shadow Of Deth, which consists of Dave chanting Psalm 23 in a pseudo-English accent. Ouch.

Overall this is most definitely not Megadeth’s St. Anger. Although they have plenty of it, the rage too often comes across somewhat farcically. Believing subtlety to be something not reserved for the thrash genre, Mustaine and his fret battering mates have produced an album that requires minimal intelligence to grasp, and just a little more humour in order to be taken seriously.