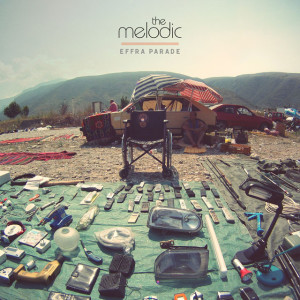 It’s been postulated that good art comes out of conflict and intense emotional states. Plato’s Republic wanted to control musicians, after all, because he knew how much we as humans love irrational and irresponsible sounds, little songs about heartbreak, war, and generally screwing up our life only to reclaim each little piece.

Even Dave Matthews and Jack Johnson, pop’s representatives of the chill-to-the-point-of-boring, have had wonderful, heavier tracks like If I Had Eyes, a rumination on unchangeable romantic failure, and Crash Into Me, one of the best displays of obsession ever penned.

Mellow has a new friend. Named after a street in Brixton, Effra Parade is the debut album of the four-piece group The Melodic. The Melodic is twee. Adorably twee. So twee that Of Monsters And Men or Noah And The Whale look like Van Halen in comparison. Both bands’ first albums featured a male/female back-and-forth singing duo, the indie Johnny Cash/June Carter dichotomy (or Bob Dylan/Joan Baez, for you folk lovers), and so does The Melodic. They play a wild assortment of exotic instruments. They’ve been labeled “afro-folk-pop,” which means the drummer will play the bongos occasionally. A truer genre would be the hypothetical, but still very real, Wes Anderson soundtrack.

Yet some part of the band’s sound doesn’t jive. And certainly that’s not for a lack of instrumental skill; they’re good musicians, but to misquote the chorus from a certain MGMT song, it feels like something’s missing. One glaring gunshot wound to the album’s pleasure is the production. While it’s admirable to record an entire album in sound-proofed bedroom, there are disadvantages. Each channel sounds flat, and nothing’s given space to breathe. Some artists, such as Keaton Henson, have done very similar feats with excellent results, but the difference is Henson kept his instrumentation simple. The Melodic’s busy, busy style just doesn’t work with non-dynamic mixing. And the album can hurt the ears to the point of irritation. It’s unbelievably frustrating, like watching Inception on an old black and white television: you don’t even know what you’re missing. A better producer is needed.

Good sketches exist within songs. On My Way, the group’s most popular number, contains a nice chorus and breezy guitar. Imperfect Time features those big, indie-prerequisite Neutral Milk Hotel horns and Charlie Brown Christmas piano. Lost To You evokes traces of Nick Drake under a tropical sun. The rest of the songs follow suit, but there simply aren’t enough hooks, variety in tempo, or soundscapes to engage for 48 minutes.

This is why, in the music realm, Insane Clown Posse has a following and LCD Soundsystem made crowds scream in Madison Square Garden, why there are self-proclaimed Dylanologists and Anti-Beliebers, why Daniel Johnston‘s homemade recordings in Texas created a cult and Turquoise Jeep is being played by a girl from Portland. All these artists differ in immense fashion, but what all of them have in common is their music moves somebody to feel something.

The Melodic have the potential. As a live band they may be fabulous, and their talent in both playing and songwriting is formidable; they just need someone to help sculpt their talent into a definable mass that people can hate or love, and not just hear. They deserve better.

The Melodic MP3s or CDs

The Melodic on Spotify