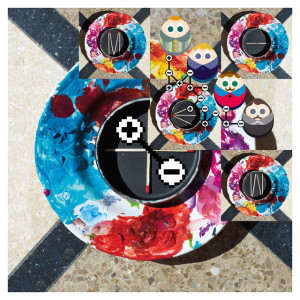 Denmark’s Mew are justly adored by a small but loyal band of followers off the back of an excellent brace of albums in the mid-noughties: 2003’s Frengers and 2005’s And The Glass Handed Kites. Mew’s progression across these two albums is comparable to that of Radiohead across The Bends and OK Computer: Frengers – on which Mew established their ability to write affecting, anthemic rock songs – was their The Bends, while And The Glass Handed Kites – the ‘difficult’ follow-up – was their OK Computer.

The knotty time signatures and tangential arrangements of And The Glass Handed Kites resulted in Mew being slapped with the ‘prog rock’ label. They seemed happy to conform to type on their next album, 2009’s No More Stories Are Told Today…. Although marginally less beserk than And The Glass Handed Kites, the album pulled off one very proggy trick indeed: a track that revealed an entirely different song when played backwards.

Now, six years later, arrives + -. It’s the band’s most accessible album since Frengers, which isn’t to say Mew have returned to that album’s straightforwardness. Instead, they’re now keeping their experimental tendencies on a tight leash, typically siphoning them off into individual, longer tracks.

Opener Satellites represents Mew at their fidgety best: one could chop it up into four discrete sections, each one containing the seeds of a different song. And yet is all flows seamlessly, from a plinking intro to a strangely Britpop-esque verse to a huge, joyous chorus to a chugging, rocking middle eight.

Elsewhere, Making Friends’ finger-clicking backing track finds Mew flirting with R&B. My Complications features some of the metallic shredding that was predominant on And The Glass Handed Kites, but it yields quickly to an aerodynamic chorus. Rows, meanwhile, is the album’s epic: a 10-minute track featuring a grandiose piano solo and ending with a long, dissonant passage of what sounds like steel drums melting.

But +- also contains a number of the poppiest, simplest things Mew have put to tape for over a decade. Witness rattles through a conventional verse/chorus structure in a shade over three minutes, while Night Believer, Water Slides and Interview The Girls are pop songs of purring, lissom loveliness. The album closes with Cross The River On Your Own, an enormous power ballad that – thankfully – abandons any subtlety in favour of heart-on-sleeve, tears-on-cheeks emotion. It’s a beautiful song worthy of a thousand cigarette lighters (or illuminated smart phones) at a festival this summer.

Cross The River On Your Own is a welcome reminder of perhaps Mew’s best feature: their disregard for ‘coolness’ and their willingness to chase whatever musical whim they choose, even when the risk of failure or embarrassment is high. + – might be a tad more restrained and less obviously ambitious than its two predecessors, but it’s still a meticulously crafted, consistently melodic and frequently beautiful work from an excellent band.