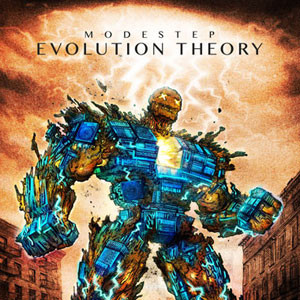 Dubstep is a form of electronic music that is seemingly in a constant state of internal discord, ravaged by dissent from people who believe that since its commercial breakthrough in the late ’00s it has since become a bastardised destruction of real or true dubstep, a genuinely innovative and very much UK derived sound. Of course, the other side to that argument is that commercial dubstep popularised by Skrillex, Flux Pavilion and Rusko et al is hugely successful, particularly in the very lucrative US market.

Modestep are a London based quartet who make exactly the sort of massive jumped up, rock-influenced dubstep that has blinkered purists up in arms. To blindly dismiss them on this basis though is unfair, as their debut album Evolution Theory has enough thrills to suggest that dubstep can move beyond its boundaries and still prove to be exciting and vital. Yet the danger is that that sound can be milked dry until all inspiration has dissipated.

Evolution Theory has been much delayed. The group, led by brothers Tony and Josh Friend, began working on the album in January 2011 and five of its 15 tracks have already been released as singles. So far, they have caused a few ripples but not yet truly broken through. The album marks their definitive statement and it piles in every facet of their sound over the course of its hour-long duration.

That sound is a hybrid of heavy rock riffs, brutal synths and bludgeoning synth breaks, all connected together by soulful pop led vocal melodies. Heavy rock and electronic music have been combined before, most notably by The Prodigy and Pendulum, to great success; and Modestep appear to be aiming for a similar effect, albeit without the deranged insanity of The Prodigy. The one thing Modestep have is an unshakeable belief in their sound and their identity. Opening track Show Me A Sign is something of a call to arms for followers of the so-called ‘Brostep’ generation. ‘This is for the ones that care,” sings Josh Friend imploring his audience, “If you’re with me show me a sign.” This slow burning build up is followed by a crashing breakdown of gnarled synth bass, juddering riffs and metallic guitar riffing. It makes for a fairly impressive opening statement.

When Modestep cut loose on their instrumental passages of brutalist dirty dance floor bass they sound visceral and vital, but it’s a shame then that many of the tracks are lumbering soulful songs with vocals that sound like they have been cribbed from The Script. These rather dull passages jar with the fevered energy of the electro breakdowns. The overwrought emotion of Another Day and bland platitudes of Feel Good are eminently forgettable.

It is easy to see how many of the songs here can reach a wide and accessible audience. Tracks like To The Stars will be equally as appealing to fans of Skrillex or Ed Sheeran. Indeed, Modestep should also go down well with a rock audience with a number of the tracks indulging in riffs and sharing a high-powered intensity with rock.

Evolution Theory is an album that has a base level thrill to its highlights but it is an ephemeral thrill that is fleeting on record, and there’s the sense that these songs will work best in the live environment where Modestep will excel. Their music is designed for a communal experience, an experience where everyone who is in thrall to their specific brand of brutalist dubstep can lose themselves.