Moon Duo – Shadow Of The Sun 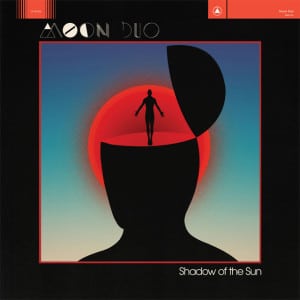 In a land far, far away lies a musical haven known by the mystical name of Portland-Oregon and therein resides a wizard known as Ripley. Ripley shares his existence with his partner, the equally mysterious Sanae Yamada and together they formed a presence in their new world after travelling to Earth from another dimension where magical psychedelic splendour was abound, giving their identity a name as they sought sanctuary in pastures new – Moon Duo.

2010 AD saw the extra-terrestrial beings unleash their spiritual, synthesised space-rock EP debut on an unsuspecting world, blending seamlessly into their new surroundings by carefully naming their creations so as not to arouse suspicion amongst the human race of their true identity. Their repetitive, mind-altering drone appeared under titles like Motorcycle, I Love You and In The Trees, calling the four-track collection Escape, a reflective clue as to the reasoning behind their relocation to our planet, perhaps.

First album Mazes followed in 2011 before the masterfully formed Circles solidified their legacy in 2012, the intoxicating opener Sleepwalker being but one highlight in a collection of many star-filled trips to galaxies previously unknown to man. Ripley’s first dawn had occurred not with Sanae Yamada but with other earthlings under the guise of Wooden Shjips, a collective that continues to produce more pummelling, space-rock drone adjacently to Moon Duo, this time with more emphasis on the wizard’s majestic ability to wield his axe of splendour.

Moon Duo, though, have always favoured the electronic trappings of their new world, mixing them with cosmic sounds only they – or mere mortals lured into the trappings of LSD and other mind-altering drugs – could have experienced on their intergalactic travels. But for their latest offering, the lunar couple start to utilise Ripley’s dextrous ability more freely as they veer their ship of psychedelia towards that of Wooden Shjips.

The eerily atmospheric Night Beat ticks along at unrelenting pace, a canvas of electronica creating a vision of space and robotic, automaton life through its repetitiveness. Ripley’s hushed, often indecipherable lyrics that could be speaking any language of the universe float ghostly overhead before a mesmerising keyboard solo takes shape and then the wizard conjures his darkest spell for a soaring solo of his own. The three-chord majority of Free The Skull again blends the electronics with incessant electric buzz for a slower, menacing effort, this time the mystical axe threatening to wreak havoc as it twists and turns in a psychedelic haze of freestyle. In A Cloud creates a vision of floating in space with peppered bursts of Ripley magnificence and joint vocals whilst Zero takes on the appearance of early 1980s synth-pop, perhaps even Ultravox maestro Billy Currie’s abduction took place for its construction. The seven-minute Ice then pushes the boundaries of durability even further, a captivating pulsing beat again joined by freestyle soloing.

When the mythical beings mould their own intoxicating space-laced sounds with the traditional rock known to earthlings though, they thrill, perhaps due to new recruit, Master of the Sticks John Jeffrey. Album opener Wilding is similar to Sleepwalker, a driving up-tempo rhythm belts out before Ripley’s lyrics take their usual, lazily uttered shape alongside enthusiastic percussion and the wizard’s delicious noodlings for an invigorating listen. Single Animal blends minor chords synonymous with Ladytron, racing axe and thunderous pounding for a short, sharp burst of adrenalin but best of all is the sonic delight Slow Down Low. Its staccato, electric-shock keyboard two-chord structure blends with buzzing axe and tortured vocals; a simple yet stunning keyboard solo and axe freestyling from the wizard then paint a picture we can only relate to the jaw-dropping photography that our own Hubble telescope has transmitted back home.

Shadow Of The Sun marks another triumph for the rapidly becoming essential Moon Duo, or Moon Trio as they should now be known. Let’s hope these beings never feel the need to return to their own universe and instead continue to enhance our own for many years to come.