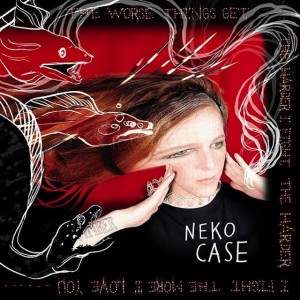 From her Fiona Apple-lite title and seeming repetition of themes from her previous album Middle Cyclone, it could be easy to write off Neko Case at this point in her career. But that would be tantamount to a crime, as Case, with her latest album The Worse Things Get, The Harder I Fight, The Harder I Fight, The More I Love You, has released her best material since 2006’s Fox Confessor Brings The Flood, either solo or with The New Pornographers. This amazing album is a full realization of what Case just began to explore in Middle Cyclone, from familial drama to her conception of her own gender.

While The Worse Things Get opens with the ironically-titled, subtle Wild Creatures, it next presents what are perhaps its two strongest songs: Night Still Comes and Man. The former features layered vocals to the extent that it sounds closer to a gospel choir than Case’s quintessential, country-inspired voice. It also features some of Case’s most quotable lines; apart from the singalong chorus of “You never held it at the right angle”, Night Still Comes sees Case quipping, “If I puked up some sonnets, would you call me a miracle?” as if to irreverently contrast the song’s aesthetic holiness. The latter, both the album’s catchiest and most forceful, hard-hitting song, features M Ward on guitar and Case declaring “I’m a man,” recalling the chorus of Middle Cyclone’s People Got A Lotta Nerve and that album’s iconic cover art: Case the action star, some sort of Uma Thurman in Kill Bill assassin, her own brand of feminism and rejection of gender norms.

Moreover, what’s always been impressive about the frank Case is exemplified on The Worse Things Get: her ability to use curse words to selective and subsequently powerful effect. In Man, Case sings, “And if I’m dipshit drunk on the pink perfume / Then I’m the man in the fucking moon / ‘Cause you didn’t know what a man was / Until I showed you.” Case, chiding both her lover and societally accepted and perpetuated gender norms, certainly garners your attention on Man. Even more in depth is Nearly Midnight, Honolulu, in which Case presents a less ambiguous story, one about a mother screaming at her child in an airport in Hawaii. “Get the fuck away from me! / Why don’t you ever shut up?” sings Case a cappella and laden with reverb, presumably recalling what the mother said. Clearly Case, on the outside, sides with the child, as she later tells it to “Please have your say,” but the manner in which Case relays the mother’s story, a manner that’s more majestic and shocking than truly disturbing, suggests that Case is perhaps not so much siding with the child but supporting every party’s right to self-expression the same way she takes pride in her own right to call herself a man.

On The Worse Things Get, there’s not a weak song: City Swans rivals Man as the album’s best straight up rocker, while the closing track, Ragtime, the best Crimson and Clover-inspired pop song since Dum Dum Girls’ Lord Knows, finds Case looking to pick herself up, a thematic connection to the gospel of Night Still Comes. Case certainly had a lot to deal with: in between Middle Cyclone and The Worse Things Get, she saw the death of her grandmother and both of her parents, which understandably resulted in a deep depression. But much like recent releases by Superchunk or collaborators The Dodos, Case uses music to give herself purpose: whether autobiographical or a telling of somebody else’s story, writing lets Case overcome. She takes it a step further on Ragtime: “I’ll reveal myself invincible soon.” If she’s talking about her next album, it’s hard to believe that one will top The Worse Things Get.