by Max Raymond
published: 14 May 2012 in Album Reviews
Tweet 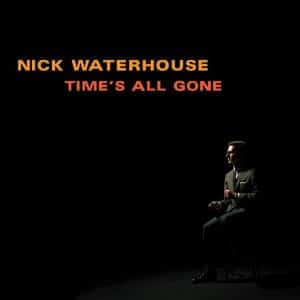 Is the appeal of ‘retro soul’ starting to die out? The international success, both critically and commercially, of Amy Winehouse‘s Back To Black lay down the rails for a veritable gravy train of artists happy to cash in on that success. Some have derailed; perhaps the record-buying public might just be ready for something else?

If so, all things considered, it’s not a great time for 25-year-old Nick Waterhouse to release his debut effort Time’s All Gone. All the trademarks are there. He uses vintage analogue equipment. His main influences are all rooted in the classic R&B sounds of the ’50s and ’60s. There are very many horns. These facts alone are likely reason enough for listeners to turn away before hearing even a note.
But what Waterhouse attempts to bring to the table is a New Orleans-style blues and jazz aesthetic but, whilst it is initially refreshing to hear, it doesn’t stick in the brain. Most of the songs have a similar style to one another and the lack of range involved in the arrangements makes listening to the album rather a chore – despite its mere half-hour’s running time. At its heart, this is an LP that’s bland before anything else.
Part of the problem is Waterhouse’s voice. There is some variation on display; for example, he can use his seductive croon on Indian Love Call and wail and yelp his way through the up-tempo numbers like (If) You Want Trouble and Some Place. Yet for all the things that he does vocally he doesn’t provide the spark that is needed to give songs like I Can Only Give You Everything the kick up the backside they need to set them alight. He doesn’t have the quality to instantly transform a song. His lack of distinctiveness really hinders him.
It doesn’t help that the tunes he’s working with aren’t the best, which is the other big flaw here. Throughou there’s very little deviation in the sound – it’s all one big procession of clattering cymbals, meandering guitar solos and a brass section that sounds a little flat save for its final salvo on the title track. If you walked into a jazz club and a band was playing something like Say I Wanna Know, you’d take it as a cue to head to the bar. Yet amongst the tedium, there is one saving grace; Indian Love Call shimmies and shuffles in a rather entrancing manner and it uses Waterhouse’s backing singers to great effect.
Time’s All Gone will not hit the dizzying fame heights of its predecessors in the soul-revival era of pop, although even if this sort of thing was still in fashion it’s questionable as to how much of a mark it would have made. Unremarkable and uninspired.