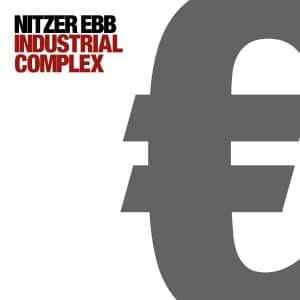 Any time a band disappears for more than a decade and suddenly returns with a comeback album, fans are quite within their rights to get a bit twitchy. Who remembers The Who’s lacklustre Endless Wire? Or The Stooges’ disappointing The Weirdness?

The case on exhibit here is Nitzer Ebb, who’ve been away for nearly 15 years, since 1995’s Big Hit. But Douglas McCarthy and Bon Harris do not fall into the same traps of outdated irrelevance that plagued the aforementioned revivalists. With Industrial Complex, Nitzer Ebb have made an absolute powerhouse of a record, at once returning to their dark, industrial roots and still managing to issue a hearty fuck-you to the scoffers, and issuing a perplexing challenge to the scores of young groups who grew up listening to Belief on cassette.

On first listen, Industrial Complex calls up emotions untapped since those glory days of early Nitzer Ebb – not to mention their compatriots, Depeche Mode and Human League – and all the style and attitude that come with them. The images packaged herein are exactly the sort you’d want from a Nitzer Ebb album; banging pipes, shooting sparks, packed and sweaty discotheques and fast cars.

Somehow though, there’s a decidedly post-millennial appeal to the music. Perhaps it’s the subtle gruffness that’s become a bit prominent in McCarthy’s voice, or the post-modern agility of the pounding percussion (sounding fresher than ever without all that gate reverb). In today’s Internet age, machines have become more the aggressors than ever, allowing these dark and menacing electronic sounds to grow pointed teeth.

The album opens with the truly pounding dance floor assault of Promises, which features the haunting lyric, “Time has been passing while you have been laughing, and time is not on your side.” This could have been the death knell for Industrial Complex, but it seems that time is very much on Nitzer Ebb’s side, and all that maniacal laughter – or whatever they’ve been doing all these years – has paid off.

Once You Say features a background vocal track by Depeche Mode’s Martin Gore, but he’s decidedly buried in the mix. That’s all right, though; there’s plenty to focus on between all the snaking synths and buzz-saw accents. The album doesn’t slow down until Going Away, in which McCarthy laments, “All roads lead away, away from me today. It’s not difficult to see you’re going away from me,” over a lush, but dissonant dreamscape. The closest Nitzer Ebb comes to a ballad is more like a fever dream.

The stunning, creeping Kiss Kiss Bang Bang is vintage Nitzer Ebb – it could have easily appeared on That Total Age. What could have been a trap – oh, the pull of revisiting old glories – comes off as fresh and powerful. Finally, we get a fist-pumping, shouted refrain (in unison, now: “Kiss! Kiss! Bang! Bang!”) and a really dark staccato synth run. Travelling rounds out the album with blippy noise and a real pop sensibility, offering just the anthemic closer such a rare comeback record deserves.

Nitzer Ebb are back in full force. Wary as today’s music buyer (people do still buy music, don’t they?) may have become under the constant barrage of buzz-bands and silly, synthy one-offs, McCarthy and Harris demonstrate the keys to staying power, and at the very least demonstrate that the last lost 15 years have not been wasted. Industrial Complex is, in short, a tour de force return from one of the mainstays of the genre.