Paul Heaton and Jacqui Abbott – What Have We Become

by David Meller
published: 16 May 2014 in Album Reviews
Tweet 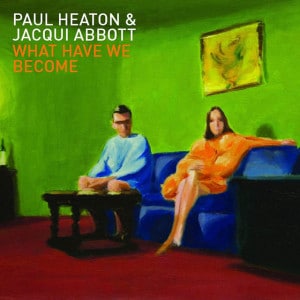 On seeing the reunited Paul Heaton and Jacqui Abbott last month at Heaton’s Salford pub The Kings Arms, Abbott was rather unrecognisable. Gone was the short bob that characterised her in the ’90s in videos for Perfect 10 and the like, and in was long hair. A fresh look. Heaton, meanwhile, looked largely the same, the cheeky, mischievous attitude still visible. Indeed, Heaton has been a familiar figure around south Manchester for years now. He’s even been to some Stockport County games despite his allegiance to Sheffield United.

This notion of the recognisable is important because, on seeing Heaton and Abbott together again and hearing bits of What Have We Become live, it’s as if they’ve never really been apart: there’s a sort of re-awakening, a resumption of where things sort of left off. Heaton said of Abbott that “it was like going into your garage and discovering a beautiful, covered up Rolls Royce that hadn’t been started in years… I always wrote songs with Jacqui in mind. Even before I met her I pictured a voice that could carry the songs into people’s hearts in a particular way”.

It’s hard to disagree with his sentiment. Recent single D.I.Y has all the hallmarks of Beautiful South past, albeit certainly not a nostalgia trip. Rather, it contains that same sort of Heatonesque razor-sharp-cum-melancholy bittersweet wit, delivered through Abbott’s typically self-assured, almost streetwise-sounding vocal. But there’s a fresh and rather invigorating sound/production to this as well, largely thanks to the jangling and clean electric guitar, coupled with sprinklings of piano. Usual Heaton features yes, but sounding renewed.

Some Dancing To Do brings a touch of melodrama with its heavy keys, drums and trumpet. All necessary, mind, as it details the collapse of a relationship – perhaps the most melodramatic of experiences – with Abbott and Heaton taking the positions of almost omniscient observers, commenting on the anguish of the party on the end of a break-up. Abbott takes a naturally cooler stance, while Heaton exercises his characteristically gentle yet subtly powerful vocal before offering a typically wry solution: “She’s got some dancing to do.” Ah yes, the restorative impact of music and dancing doesn’t often fail.

Title track What Have We Become again carries on a trusted formula of the past by fusing the bittersweet with hints of social commentary; lyrics such as “‘What have we become?’ said the mother to the half-ton son, chicken wings have replaced the fun” and “the world is made of botox, there’s no heart to break” suggest a society driven by consumption and a lack of emotion. Yet behind this is a degree of subtle grandeur through the use of strings, perhaps a lingering reminder of a time before. “We’re so busy loving it we’ve forgotten to hate… opinionless, sad and overweight,” sings Heaton.

This aspect of social commentary ripples through What Have We Become. The brilliant hook-driven opener Moulding Of A Fool, with lyrics such as “your death will pass unnoticed like a hiccup or a cough”, are perhaps pointed barbs to certain politicians of a right-wing persuasion, while One Man’s England arrives as an appropriate time politically as immigration sits again at the top of the political agenda, with Heaton chronicling the complexities of race, multi-culturalism and British identity while Abbott delivers ’60s-pop “do-dos” and the horns blare in the background. They add a bit of two-tone to it. No doubt intentionally.

Album closer When I Get Back To Blighty carries a sort of cool ’50s rock ‘n’ roll swagger alongside lyrics like “this country is out on the lash” and allusions to backstreet pubs, shock and awe and that “everyone around us agrees that Phil Collins must die… a prisoner to his tax returns”. That raised a chortle; it comes from nowhere and is delivered with willing, almost pleasurable conviction by Abbott.

Heaton and Abbott are firing like old on What Have We Become, with elements from The Housemartins – particularly the social commentary – and obviously The Beautiful South evident here. But there’s a real freshness here, too. Much like Abbott on-stage at The Kings Arms last month, some bits seem unfamiliar but it’s ultimately recognisable while also feeling rejuvenated. Yes, Heaton’s Rolls Royce analogy is a good and accurate one. The engine purrs again.