A Place To Bury Strangers – Transfixiation 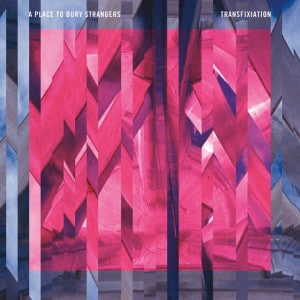 After two years of solid touring, New York’s masters of noise A Place To Bury Strangers have allegedly taken a “bold, experimental step forward” for their new 11-strong collection, Transfixiation; however, unless they’re simply referring to a tempering of the overwhelming brain-melting cacophony of noise so prevalent in earlier material, it’s largely difficult to see where exactly this experimentation lies.

Single Straight was the first new cut to raise its doom-laden head above the surface, where a pummelling seven-note guitar riff descends into a pit of despair and chaos of scrambled, choppy guitars and manic, cymbal clashing percussion. With the rubbery bass bouncing alongside hollow vocals, there’s a distinct feeling of less noise emanating from a band once dubbed the noisiest in Brooklyn.

Second single We’ve Come So Far is a contender for best track on the album: a surprising addition of a female vocalist to complement front man Oliver Ackermann is perhaps one of the aforementioned experiments and it works well. The vocal dual wrestles throughout a rampaging sonic assault of pulverising bass, screeching guitars and a pummelling drum beat; it’s a compelling, persistent ear-bleeder to lose yourself in that reminds of what this band are capable of, with Ackermann declaring that the song is about absolute truth where any success in life should be celebrated.

Elsewhere, the album occasionally confuses, lurching between styles. Once again, there is an element of sparseness that sees a return to the band’s Joy Division influences. Opener Supermaster reminds of the Manchester post-punkers with its bleak and minimalist, pace-changing structure where an energetic bassline melds with scrawling guitar and incessant percussion to provide an early highlight before a short burst of guitar madness conjures fears of a Troutmask Replica Captain Beefheart rebirth of insanity. Then there’s the industrial, high pitched screech of Now It’s Over, where a double-clocked ticking beat joins a driving bass and more noticeable melody against its factory backdrop.

The cacophonous, swirling guitar chaos of Love High boasts foreboding vocals against new drummer Robi Gonzalez’s constant thunder but it’s all done and dusted in a mere two minutes. What We Don’t See then veers into more familiar territory, its contorted, corrupted almost tortured presence sounding like a beyond repair copy of a warped The Jesus And Mary Chain vinyl.

Ackermann recently claimed that the most intense fear and feeling is experienced when attending a show, where the listener is genuinely scared and the dreadful, chilling Deeper will do just that – DO NOT play this when your kids are around. It’s like Lucifer is suddenly in your room, ominously warning that to fuck with him will lead you to a rapid descent into his burning underworld. I Will Die continues this cheery, happy go lucky summery feel with an explosion of chaotic noise, heavily distorted vocals and an ear-battering of mayhem that depicts the most disturbed minds of the local lunatic asylum.

The slow funereal intro of Fill The Void is another hell-bound effort before racing guitars save you from despair, propelling the track to a different place but melodically it’s less inspiring, again encroaching on The Jesus And Mary Chain’s early career but with little to match the underbelly of melodic genius that defined the groundbreaking Reid brothers. I’m So Clean is another devil-inspired cut, but unless a ride on Rollercoaster 666 is your thing its distorted blurry chaos will mess with your mind.

With Transfixiation now becoming the band’s fourth album, the formula of overwhelming noise was becoming perhaps a little too familiar. There are still elements of their early guise present but the need for change is clearly reducing the decibel levels and whilst that isn’t necessarily experimental, it does represent somewhat of a gamble for a band whose fanbase court deafness. 2009’s Exploding Head first showed a refining of their sonic assault; 2012’s Wisdom continued in the same direction, but unfortunately 2015’s Transfixiation sounds, in places, like a band that are occasionally struggling with their own identity; more than likely, they’ll rediscover it very soon.

A Place To Bury Strangers MP3s or CDs

A Place To Bury Strangers on Spotify