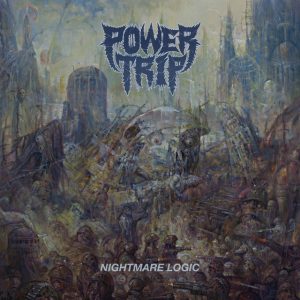 It’s surely only a matter of time before deely bobbers become popular again or there’s a Rubik’s Cube renaissance. The ’80s seems to be coming back in a big way; we’ve already got Thatcher II, a new clown in the White House, and Flashdance is returning to a stage near you. Not that this last fact will bother too many of Power Trip’s intended audience, unless circle pits have attained a new sense of grace in the last few months. Throwing their hat into the ring (it’ll be a baseball cap, obviously) Power Trip have released an album that taps into the thrash and metal scene of the ’80s so perfectly that it practically needs carbon dating to check that it was actually made in 2017. Clearly the revival is on.

And right now the conditions are perfect for a resurgence. The original thrash movement took the influence of new wave of British heavy metal and married it to punk and hardcore to create something blisteringly fast and aggressive. More importantly, it was a movement with something of a political conscience. Megadeth might have had songs about serial killers gallivanting about on Black Friday, but they also confronted the idea of nuclear armageddon and the nature of the arms trade. Anthrax had songs based on Stephen King novels, but also addressed the treatment of the Native American population, homelessness, and to some degree the separation of church and state.

The likes of Nuclear Assault also weighed in with songs that discussed environmental issues, animal testing and once again impending nuclear devastation. Back with Power Trip, the last few seconds of Waiting Around To Die sum up the state of the world today, now that we exist in a post-truth era; “Like fools we can reject the truth and push the truth away from us. And cause our own destruction” seems like a rather timely warning. The song itself is a blast of positivity, insisting that life is worth grabbing by the scruff of the neck and living to the full.

Power Trip embrace the political essence of hardcore and thrash but do so without coming across as overly worthy or preachy, and don’t sacrifice their riffing chops in order to make a point. The likes of Ruination rattle along like Exodus at the height of Bay Area creativity, whilst If Not Us Then Who thrums with a series of propulsive riffs that early Metallica would be proud of.

Executioner’s Tax meanwhile embraces the chugging riffs and chanting joys that the likes of Stormtroopers Of Death made into an artform (albeit, in the case of SOD, a somewhat tongue in cheek art form) and uses them to discuss society’s need to numb itself on the way to the grave. What’s impressive about Power Trip however is that they’re not just in thrall to the bands that are now traversing the planet on the back of 30th Anniversary tours or not-particularly outstanding “return to form” albums, but they cut their own niche too. Their blending of genres calls to mind a very short period of time where thrash was slowly morphing into death metal and bands like Xecutioner (Obituary), Death, and Morbid Angel were coming to the fore or the likes of Sepultura were creating a harder more ferocious version of thrash away from the Bay Area (Tampa and Brazil for example).

Whether Power Trip are acknowledging this on the final track of the album, a swipe at religious indoctrination that shares its title Crucifixation with a 1990 Deicide song is anyone’s guess but even as a coincidence it seems apposite. In truth, it’s a song that shares little in common with the god-bothering Glen Benton’s band beyond its theme, preferring to stick to stabbing thrash onslaught (pun slightly intended), but in Riley Gale’s throat shredding roar the bridge between death and thrash can be found.

Nightmare Logic is not just a blast of nostalgia (the lightning paced blast of Firing Squad talks about ridding the planet of the older generation), it’s a cry of unity wrapped up in a ball of frantic, energetic and impassioned music. Even at this early stage of the year, it’s fair to say that Power Trip might just have written one of this year’s most exciting and important albums.