Primus – Primus & The Chocolate Factory and the Fungi Ensemble 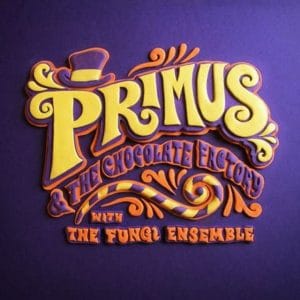 In a case of the bizarre from the mind of Primus’ bassist and singer Les Claypool, the American funk metal and experimental rock group reimagined the entire soundtrack to the 1971 film Willy Wonka & The Chocolate Factory starring Gene Wilder in a psychedelic flair that rivals the original in acid intake. The darkness and subtle bleakness of the film are highlighted in these covers; Primus & The Chocolate Factory has all the derangement of that scarring riverboat scene, and it’s effective as an adult’s reimagining of the original’s madness.

Perhaps surprisingly – or unsurprisingly, given Claypool’s love of the film – Primus & The Chocolate Factory is extremely faithful to the original Oscar-nominated soundtrack by Leslie Bricusse and Anthony Newley. Every track is covered, and each lyric, down to Claypool’s trademark muttering, is played straight. Unlike the supposition of synchronization between Pink Floyd’s Dark Side Of The Moon and The Wizard Of Oz, Primus’ covers hold a lot of merit as an alternative soundtrack when watching its respective movie. The tracks mostly work in timing and certainly work in atmosphere.

One thing’s for sure: this is a Primus release through and through. The xylophone of Candy Man is just perfect, and is quite good at evoking Charlie’s whimsical. Wait a moment, is that mooing in the background?! And of course, Claypool’s bass solos are all over Pure Imagination and any song featuring Oompa Loompas.

There are quite a few minute-long songs that will either make or break the album for listeners. Some will see them as one or two minute ditties that skippable or forgettable in favor of the longer compositions, but others will find that they add quite a bit to the Chocolate Factory milieu.

Primus is far less metallic here, but that’s due to the desire to follow the soundtrack than an aging band. Jerry is no racecar driver on the release, but there is a notable similarity to Here Come The Bastards and parts of the Antipop album. The experimental tendencies pop up on the non-singing tracks, such as the opening and closing tracks Hello Wonkites and Farewell Wonkites. A few of the Oompa Loompa tracks feature guest celloist Sam Bass, who adds a great stage musical-esque quality and insanity.

Tim Alexander, the drummer on Suck On This and Tales From The Punchbowl, is back in the game, but his percussion is surprisingly subdued on this release. A lot of the polyrhythmic craziness that typified his early career is lacking. Perhaps that’s due to Claypool’s desire to stay faithful to the original soundtrack. Farewell Wonkites and I Want It Now have the old Alexander that long-term fans will appreciate, and he’s still incredibly on point with the rest of the band on every other track. The comparatively restrained drumming actually helps Primus in not losing themselves in their own absurdity.

Three tracks are absolute must-listens for fans of Primus and/or Willy Wonka: Golden Ticket, Pure Imagination, and I Want It Now. Claypool’s refrain of “I’ve got a golden ticket / I’ve got a golden twinkle in my eye” and Larry LaLonde’s guitar lead are like the sonic equivalent of having an absurdity-induced aneurysm. Pure Imagination has one of the best bass leads that Claypool has ever played, and his singing is even paternal. LaLonde sings the lead on I Want It Now and plays an amazing surf rock-inspired riff at the bridge. It’s underpinned by a perfectly sweet cello line by Bass.

Taken for what it is, Primus & The Chocolate Factory is a fantastically ridiculous release that should please fans of either. It has pitfalls that are more likely the result of the difficulty of the source material than the result of a band losing its touch, but the three previously mentioned tracks are must-listens. So take a ride, and step into a world of pure imagination.