Professor Green – Growing Up In Public 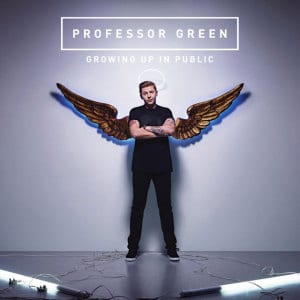 Professor Green has had a rough time of it lately, and he’s here to tell you all about it. Growing Up In Public, the Londoner known to his mother as Stephen Manderson’s third album, is so self-referential that it almost feels like an autobiography, with tales of his celebrity marriage, spats with fellow pop-stars, car accidents, run-ins with the law and so on.

Over the last few years, Green has built up a loyal audience for his particular brand of grimey-pop and Growing Up In Public will no doubt go down well with them. Indeed, it starts off well enough, with I Need Church’s muscular, crunchy guitar riffs kicking off the album, before Green starts spitting his quick-fire raps – there’s digs at “knobs” like The Script‘s “Danny O’Donog-who-what?” and a disparaging reference to Robbie Williams‘ notorious postcard from the edge of a breakdown Rudebox (which prompts a staged voicemail appearance from Williams himself at the end of the track).

The reference to Rudebox is pretty ironic in fact, as there’s a level of self-absorption on display that recalls Williams’ lowest musical point. Thankfully though, Green is a far better rapper than Williams, even if his slightly nasally whine does tend to grate on the nerves after a while – although the generally high level of his collaborators and the mostly impressive production means that this isn’t as much as a problem as it could be.

What does become a problem is the rather aggressive air that permeates throughout Growing Up In Public. It feels rather like the musical equivalent of taking a good mate to the pub to listen to his problems, then warily eying up the empty glasses piling up while desperately contemplating a plan to usher him out of the door before he starts headbutting the jukebox.

So we have Not Your Man, an unpleasant, bordering on misogynist, rant against a materialistic ex-girlfriend (culminating in the ‘yes he really did say that’ line of “Is it because my dick isn’t as big as Dappy‘s?”) although credit is admittedly due for rhyming ‘Louis Vuitton’ with ‘futon’. Name In Lights, a duet with Rizzle Kicks, is a tiresomely meta commentary on the recent tabloid scandal involving himself, Cara Delevingne and a parcel of cocaine, while Fast Life is yet another sorrowful story of how hard it is being a pop star who sleeps with loads of women, with an opening line of “I just woke up next to this chick I don’t know and I’ll probably never see again”.

However, when Green isn’t telling all and sundry about how much powder he sticks up his nose, and actually lets some emotion in, the results are rather better. Lullaby is by far the best track here, a touching tale of his battle with depression, touching on his real life tragedies (“I don’t wanna do what my dad did with a rope”) and Tori Kelly‘s angelic vocals on the chorus makes it an uplifting, rather than depressing, listen. Similarly, Shadow Of The Sun has an atmospherically brooding quality to it, while Dead Man’s Shoes is a genuinely witty look at the problems beset in marrying a reality TV star (Green is, of course, married to the former Made in Chelsea star Millie Mackintosh).

The problem is though that for every bright spot there’s a song round the corner that sounds like it’s been built in a laboratory with the instructions ‘Rudimental-lite’ writ large. While fans of Professor Green will doubtless lap it up, there’s not enough to convince the unconverted that there’s anything sufficiently different on offer from the rest of today’s chart music and it’s a sad fact that Green’s raps, while possessing an undeniably impressive flow, just end up sounding whiney and irritating after a while. There’s talent here, although it’s often buried deep beneath generic beats and lyrical self-obsession that eventually becomes a bit exhausting to listen to.