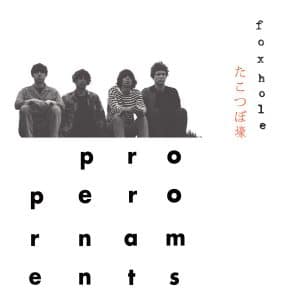 There’s a whole load of adjectives you could hurl at The Proper Ornaments’ second offering Foxhole: dreamy, hollow, pallid, limp and wishy-washy all spring to mind. But it’s endearing.

Foxhole’s overall sound and vibe was created by chance rather than by any masterful technique application. Initial recordings at Hackney’s Tin Room went a little wrong after a fault with an 8-track machine. Without getting into too much detail about what the hell a pinch wheel is, the aforesaid component was the guilty party and after decamping to James Hoare’s Finsbury Park bedroom, a re-recording process took place with the fruits now emerging some two years after writing first began.

The result of the technical difficulties probably gave the guys a push towards how the sound of the album was crystallised, the sparser arrangements marking a departure from 2014’s debut Wooden Head where their joint love of guitar fuzz was possibly the largest factor that shaped it. This time, although this could be said of the first album due to its influences being about as hidden as a Klingon warship with a buggered cloaking device, the late 1960s joyous, carefree abandonment oozes from song after song, conjuring up images of scantily clad – if clad at all – long haired women throwing various slinky shapes in appreciation of the jangly sounds. If that’s too much for any Mary Whitehouses out there, then just think early 1970s television programmes where colour was still in its infancy. Heck, even those original pale coloured Volkswagen Beetles might pop up in your heads for an indication as to where this music has its roots.

Lead single Memories is where the band first showed their departure from the earlier guise, the piano-led melancholic nature of the most dainty of dainty songs with the slightest psychedelic twinge is achingly delicate whilst perhaps not quite worthy of beautiful, gorgeous or any other exaggerated praise-laden tag, despite hinting at The Beatles which is unsurprising when you learn they’ve spent a lot of time listening to John Lennon’s solo work. Closing track The Devils also draws on the same underlying piano structure for another slice of genteel psychedelia.

Cremated (Blown Away) is another single, this time in a different mould. There’s a whiff of the Velvet Underground here, albeit one hollowed out and fuzz-less, its dinky guitar jangle sounding as if someone’s got hold of the Velvets’ stems and discarded some layers entirely. The same applies to opening number Back Pages; it’s all very nice but like the debut album, it lacks punch – unlike live performances, where things generally feel a lot fuller, thicker and more satisfying.

The swirly 1969 benefits from a memorable melody set against shuffling percussion, delicate piano and simplistic guitar before emitting a twistingly mesmerising sub-melody. Jeremy’s Song’s wispy vocals combine neatly with a subtle wall of sound and intricate guitar plucking for another decent – if short – cut, whilst Bridge By A Tunnel is pleasing despite a little excessive over-use of the song title during its lead out.

It’s tough to spot much progress on Foxhole when compared to Wooden Head. In fact, it’s more devolution than evolution but the simple sparseness works well in moderation for some well penned songs. Lazy afternoons will go hand in glove with Foxhole, but, as before, those seeking excitement will probably want to look at Hoare and Oscarnold’s parent bands.

The Proper Ornaments MP3s or CDs

The Proper Ornaments on Spotify