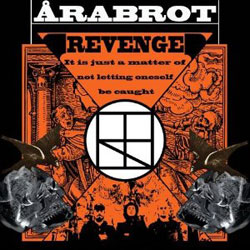 It’s not all dainty churches and rural countryside in Norway. There are young offenders’ institutions next to waste disposal sites too. It’s from a waste disposal company that Årabrot took their name. They have since set about exploring the more grime and filth ridden aspects of existence.

Rather than attack everything at breakneck speed, Årabrot’s approach is one of steady, grinding advance. They slowly pummel their listeners into a pulp before delivering several well placed blows; then administering an additional kicking for good measure.

Relentless drum rolls and an ear piercing shriek of feedback open the album as the band describe The Most Sophisticated Form of Revenge. Frontman Kjetil Nernes alternates between an unhinged wail and a throaty growl as atmospheric walls of unsettling noise begin to build. It’s only ever going to end one way as his tone becomes increasingly threatening, and on cue the band falls into a repetitive concrete heavy riff delivering a series of body blows as the song reaches its climax. Interim Me continues with a similar tribal rhythm pattern to its predecessor and takes great delight in further assaulting the senses.

Although described by most as a metal band, there’s a lot more going on here than a simple genre definition allows for. Årabrot’s music is most closely aligned to that of mid-period Melvins and there’s enough background noise to rival the most terrifying of Ben Frost‘s releases. They’re slowly paced and every move is carefully considered, but there is always room for a song to take off in a different direction. Quiet sections can explode into freakish noise at any moment. Elsewhere they evoke the pounding melodic grunge of Tad whilst hinting at the hellish screams of a Ketamine dosed Slayer. It’s really not for the faint of heart.

The early parts of the album are defined by tribal drumming and claustrophobic riffs and the occasional concession to bursts of shrieking speed (The Wretched Child), but it’s on the longer expeditions into Årabrot’s nightmarish vision that really impress. The Dolorous Years stretches out to over 12 minutes and lurches between a series of frantic repetitive riffs peppered with furious drum fills before it canters into a barrage of noise and guitar abuse that seem to have been created inside a fully functional kitten squashing factory. Its incessant nature is capable of inducing a severe sense of fear.

The Pilgrimage seethes nicely with an understated chugging guitar riff, and Nernes grows like a lion gargling glass. It really comes into its own around the halfway mark though when the assault is dropped back into a creepy, almost melodic section. A guitar wails in the background as serial killer Jeffrey Dahmer recounts his modus operandi. It’s genuinely disturbing.

The Primrose Path closes the album in slightly different fashion as Nernes warns the listener repeatedly not to trust him as everything he says is a lie. It will all end in tears, beatings and death he suggests, and yet it’s impossible not to follow him through the bilious clouds of guitar towards the inevitable conclusion. Every step of the way it is as oppressive as anything Swans produced on their skull crushingly heavy album Cop, and as such, it’s utterly thrilling.

Revenge is not an album for the faint hearted, but for those who like to indulge in the darker side of life, there are few better albums out there.