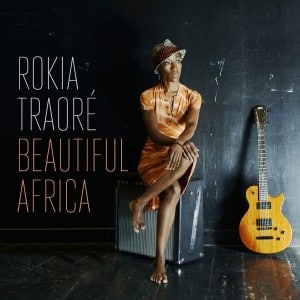 Whilst this is not the first time the superb Malian singer-songwriter Rokia Traoré has worked with a western production team, Beautiful Africa does seem to sit very comfortably alongside a string of albums now emerging from West Africa. Ngoni superstar Bassekou Kouyate worked with Arcade Fire producer Howard Bilerman on his fantastic Jama Ko album, whilst Bombino has just released Nomad, a recording produced by the alchemical hand of Dan Auerbach of The Black Keys. Traoré’s Beautiful Africa, her first album since 2008”s sublime Tchamantche, was recorded in Bristol with British musician and producer John Parish, perhaps best known for his work with PJ Harvey.

If it feels like an odd combination on paper, even a cursory listen reveals the collaboration to make perfect sense. Parish has always had a raw, unpretentious way with production which captures the energy and feeling of a song. Much of his work also has a strong connection with the blues, something that runs deeply through Traoré’s work, particularly on this fine album. Whilst this album is certainly more muscular and rock-tinged than anything Traoré has produced before, Parish has undoubtedly been respectful and empathetic towards the strong traditions of Malian music.

Beautiful Africa is an ambitious work that finds Traoré singing in three different languages (her native Bambara, French and even a little English). It also feels remarkably positive and celebratory. Although perhaps missing some of the anger and poise of Kouyate’s Jama Ko, it works its magic through the intensity of the musicianship behind it, through the nuanced inflections of Traoré’s distinctive, haunting voice and through the engaging power of rhythm and groove (the presence of the always excellent Sebastian Rochford on drums here is a significant factor in the sound of the music).

Traoré’s voice is particularly wondrous on the lovely, delicate N’Teri, where she demonstrates not only total melodic command but also a deft ability to expand and extrapolate the song’s fundamental theme. Fascinating throughout is her interweaving interaction with backing vocals, sometimes a form of call and response, at others feeling like a fully integrated small vocal ensemble. The insistent Tuit Tuit begins with an inspired chorus of what seems like birdsong.

The connections between Malian desert blues and western rock music are explored to fruitful results. The compelling 6/4 groove of Kouma even vaguely resembles Ocean Colour Scene’s once ubiquitous, now forgotten Riverboat Song, although it sounds considerably fresher and more contemporary than that piece of retro-nostalgia. The wonderful Ka Moun Ke is as infectious as any commercial pop song, whilst retaining its own personality and character. This is living, breathing music. The unpredictable syncopations and driving, stoical forward motion of Tuit Tuit exhibit a profound, intuitive connection with the traditional strengths of West African music.

What is perhaps most impressive about Beautiful Africa is its sheer number of thrilling twists and turns. The extraordinary Sikey begins with an engaging, brilliantly executed syncopated groove with energy and defiance, before suddenly transforming into something slower and more menacing, before lurching back to the original theme. It’s just one of many moments that surprise and delight in equal measure. “More intense than ever,” she sings on the wild, tempestuous and defiant title track. This could serve as an accurate description of much of the album as a whole, although there is nuance, colour and detail here in abundance too. It concludes with the charming ballad Sarama which stays just the right side of sentimental.