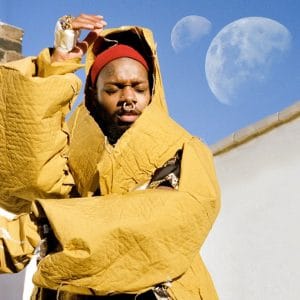 Sometimes we might describe an artwork as seminal because, following some retrospective appraisal, we can clearly trace how an aspect of its creation or production led to a flourishing of bright new descendants. Fertile inspiration branching off organically in the limbs and offshoots of keen imitators, each carrying the same genetic mark, derived from the same seed. A fresh synthesis of oblique influences – when channeled through a mastery of form, or confidence in delivery, or else profound depth of sincerity – can satisfy our collective will to retune ourselves to unfamiliar frequencies.

There is a case to be made for soil, the debut album by serpentwithfeet, to be sensibly understood as seminal before even being granted the benefit of hindsight. It’s incredibly rare that a creative talent of this magnitude arrives at all. It‘s astounding that they would also succeed in presenting a vision of such striking lucidity across their first major work. Put simply, soil is an extraordinary album, triumphing seemingly without making any artistic concessions.

Of course, serpentwithfeet (born Josiah Wise) didn’t just ‘arrive’, materialising fully formed out of thin air. In an interview with The Fader, Wise reveals that he was raised in a middle-class black neighbourhood in northeast Baltimore, joining the choir at his family’s pentecostal church at the age of six. Of his childhood experiences, he states “I loved the grandeur of it. I was very excited about church as a kid. That was my world.” He would go on to study and become obsessed with European classical music, ignoring suggestions from friends and teachers to pursue genres closer to home. It seems Wise never dropped this affection for the grandiose or for cerebral artistry, because every composition on his début album could aptly be described as such.

“I know you feel too old, but if you whisper, only I will hear you,” Wise intones earnestly in a melody from the distant past-future, accompanied by a lone clarinet, as we feel soil’s immense gears begin to shift underfoot. He joins himself in glorious harmony, shifting from major to minor key in the same breath, serenely dancing with tonality. Wise ushers us into his mind-palace cautiously and with loving tenderness until we realise he has built a skyscraper in front of us, all of breath and pulse. From atop its spire he swears with soaring conviction that “the best parts of you lie at the bottom of you,” that “love says you will always be enough,” and that “there is space for you right here in this home, in this body,” and there is nothing to do except believe every word.

As an introduction to the world of soil, it is difficult to imagine one more fitting. There is no cynicism or dishonesty in any of this music, and there are no casual remarks to be found. The stakes only get higher from here, with each of soil’s tracks spilling over with full-bodied sincerity.

On Messy, Wise doubles down on his defence of total vulnerability, urgently calling for the display of “your ugliest parts” and the naming of thorns. Early in the song, he proclaims “each time you deny my mess, you’ll find yourself closer to me”. The paradoxical nature and beautiful simplicity of this phrase give it a koan quality, but later the statement comes back in endless repetition, becoming a mantra, then an incantation, then perhaps a curse by the song’s closing bars. There are many hooks put to similar use over the span of the album; first proffered to us for the value of their message, later spun into texture as they are chanted and looped. If you let them, soil’s strange vaulting melodies will bore their way deep into your subconscious.

Björk has said of Wise, “he is, vocally, one of the most emotionally generous singers.” It is fitting that in Wise Björk has identified not a protégé, but a peer. Both artists have a strength of voice (compositionally and literally) that can be so all-encompassing at times that it is easy to take for granted the considerable efforts put into production, mixing and songcraft. For soil, Wise recruited Clams Casino, Paul Epworth, the Boston-based mmph and label-mate Katie Gately to help realise his vision. The producers succeed by avoiding the urge to overcomplicate Wise’s compositions with fashionable futurism or unwarranted gadgetry. Instead, attention has been paid to giving each track a cavernous, monolithic quality that makes them feel timeless. Beats hit hard when they need to, but front-and-centre at all times are Wise’s astonishing vocal lines, pirouetting around one another in bouts of swooping melisma.

Tonally, serpentwithfeet seems always to be at the intersection of gospel and liturgy – juxtaposing the spiritual-communal simplicity of the church with the rococo complexity of The Church – even as he sings about the intense sensuality of a man’s musk, as on ‘waft’ or ‘fragrant’, in which Wise seems to invoke Janet Jackson and Olivier Messiaen simultaneously. He issues his hymnal about men loving men with total conviction, but doesn’t debase himself in referencing the liturgical by winking to the audience with boorish vitriol. Instead, he takes a masterly approach by earnestly re-contextualising and adapting his childhood structures to suit the sensual adult he has become. On Cherubim he wails “I get to devote my life to him! I get to sing like the cherubim!” with a fierce, all-or-nothing passion that is equally religious and sexual in nature, without distinction.

Gratefully, after an album of considerable turmoil and high drama, Wise sends us on our way with the meditative and beatific Bless Ur Heart. There are verses and even choruses, and what choruses. “Heart,” he sings, again and again and again, with all the cadence and melody of Stevie Wonder’s brightest sunrise. Pianos, strings and vocals build to a final major chord blood rush, and then it’s all over. “I’ll keep a tender heart,” he declares, beaming in every sense. So what can we do except promise the same?