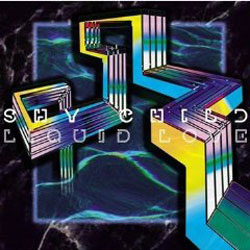 Shy Child’s last album Noise Won’t Stop announced itself in a squall of keytars and squelching bass notes. It was a loud, bratty and an exhilarating, if unrefined, piece of work. Yet there was something of a loveable innocent charm to it.

Liquid Love finds Shy Child growing up, moving on and investigating the smoother side of the ’80s rather than utilising the bullish sounds of the early Rave scene. The title track indicates that the band – duo Pete Cafarella and Nate Smith – have been listening to more than just upwardly mobile synth-based pop music of late. Pinching the opening bars from Fleetwood Mac‘s Little Lies and sprinkling a dusting of Fleetwood Mac’s Everywhere on top for good measure, they get away with the Fleetwood Mac overdose thanks to the sheer glee that runs throughout the song and the fact they’ve turned in a smart ’80s electro-reworking. Moving on from the influence of Stevie Nicks et al, the song develops into a melody that screams D.I.S.C.O. at the top of its lungs. It’s classier than it sounds.

Disconnected continues in a ridiculously poppy manner, with a chorus soaked in sugar that does the trick. It’s almost as if Steps have risen from the dead and become halfway decent. Take Us Apart then shifts down a few gears and plunders the lazier side of electro – but for a wonderfully propulsive bassline, the song would be almost comatose. Strangely, it’s also one of the finest moments on the album, which is mainly down to a fantastic vocal performance from Cafarella.

The needlessly overlong Criss Cross ventures into Miami Vice territory, and although the filthy bassline returns to the sound of Noise Won’t Stop, it is not an entirely welcome addition to the album. It meanders on and on, only grinding to a stop after seven very long minutes. The fact that there are some distinctly Phil Collins-esque drums in the mix doesn’t help matters, and the pointless interview with a female musician that inexplicably blathers over the last minute or so thumps the nail into the coffin lid of the song.

From here things go down hill a little further, with the duo having seemingly used up all their best hooks for the opening trio of songs. Open Up The Sky hints at influence from The Bee Gees and Tavares, but the result is more of a disappointment and less More Than A Woman. Meanwhile the electro-lope of Depth Of Feel is disjointed and lacking in ideas, as if the band played the whole thing with one finger on a key pad and one eye on the clock.

There are still some nice touches to be found, not least in the final track Dark Destiny, whose place in a John Hughes film should be applied for retrospectively. Its tale of getting stoned and staying home mixed with the essence of Brian Ferry‘s Slave To Love possesses a na�ve charm that drips with the same kind of nostalgic innocence that makes The Breakfast Club such a great movie (or such a steaming pile, depending on your standpoint). It is an oddly affecting and a neat way to close out an album that, despite dropping the odd clanger, pillages the ’80s with considerable style.