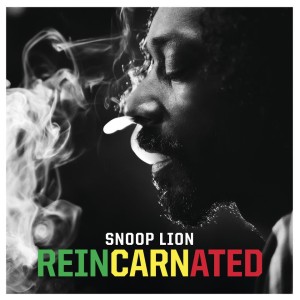 Snoop Dogg’s reggae reinvention and the Rastafarian reawakening that has prompted him to rename himself Snoop Lion was initially thought of as something of a joke and a gimmick, a publicity stunt to boost a flagging career after almost 20 years in the hip-hop game. Indeed, a number of Jamaican musicians and prominent Rastafarian figures have questioned his motives.

Reincarnated is the album in which Snoop Lion strives to make a roots reggae album that highlights his enlightenment into the genre of reggae and the message it conveys. In interviews leading up to the album he speaks about his love and adulation of legendary figures like Bob Marley and Jimmy Cliff. This is his rejection of tired hip-hop values in favour of spirituality, inclusiveness and positivity. As such, it is disappointing then that despite a wealth of collaborators and an apparent commitment to recreating the reggae sound, the album he has created is a largely insipid collection of pop reggae songs that is often dull and rarely thrills.

Whatever his motives are, Snoop has gone all out pop; which is not of itself a bad thing, of course. The album is mostly produced by Diplo in his Major Lazer guise, and this proves to be an excellent choice. The Major Lazer sound is co-opted, with a number of tracks employing low end bass wobbles and perky brass bursts aligned to a generally classy sound. So, the sound of the songs isn’t much of a problem. Instead, the vocal hooks and melodies often crucially lack an edge to lift the songs beyond sounding ponderous and overwrought.

As well as Major Lazer, pop songwriter Angela Hunte is a prominent collaborator. It is her vocal hooks that enliven Here Comes The King and So Long. In contrast, Snoop himself is often a distant figure who flits in and out, half singing, half rapping in his usual laconic style. It’s an unsatisfying combination, even if there is still a slight pastiche charm providing some small pleasure.

Lyrically, the songs here are overwhelmingly concerned with spreading the inclusive message. Almost every song is chock full with platitudes and exhortations to join together as one, a show of unity. Here Comes The King casts Snoop as some sort of saviour: “If you hear me come and join the revolution.”

Lighters Up is perhaps the best track here, primarily due to the presence of Jamaican dancehall stars Mavado and Popcaan who provide a welcome and much needed burst of energy. This is in stark contrast to Drake’s lazy, almost phoned in verse on the anti-gun, anti-capitalist anthem No Guns Allowed.

As the record progresses, further nadirs are reached and surpassed. The lamentable Smoke The Weed is clichéd and quite dreadful, while Tired Of Running features an almost obligatory forgettable vocal from Akon. It’s left to Rita Ora to relieve some of the torpor with a rousing chorus hook on Torn Apart.

More than anything Reincarnated is a strange album. Snoop seems disconnected throughout. Snoop Lion markedly lacks the edge and crucial touch of weirdness that Snoop Dogg progressed. You sense the record would be far better if it explored the darker side of roots reggae and ramped up the dread rather than employing Miley Cyrus to deliver a rather po faced pop hook as exemplified on closing track Ashtrays & Heartbreaks.

If Snoop is genuinely finished as a hip-hop star and rapper then he must be given some credit for at least attempting to do something different. However, Reincarnated severely lacks any sense of real passion; for all the positivity, it never really says anything. At its best, this album is nothing more than a passable appropriation of pop reggae in 2013.